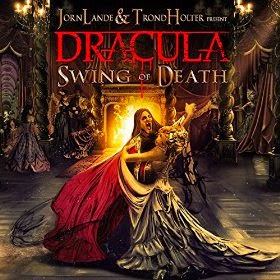 Jørn Lande is one of hard rock’s most prolific artists. With over thirty albums with varying projects, his voice and range are among the most versatile in the industry. His newest album, Dracula Swing of Death is a journey into the dark and light that haunts men’s souls and the legend behind the conflicted individual we knew as Dracula. Both in stories and in history Dracula was a figure both feared and loved for his fierce determination and vicious cruelty. Join Jørn Lande on vocals, Trond Holter on guitar, Thomas Bekkevold on bass and Christian Svendsen on drums as Jorn brings you Dracula Swing of Death.

If I were going to imagine a rock opera based on the myth and legend of Dracula, I could think of no better voice to go with the hard rock version than Jorn and his band. The gripping vocals and intense musical imagery brings the listener deep into the sometimes misunderstood world of Dracula. If you follow the legend, Dracula was a warrior for Christ until the one person he loved the most was taken from him in an act of betrayal so foul he sold his soul to the devil. His goal? Make every son and daughter of God pay for his misery. Add that to music and you have Dracula Swing of Death.

The album opens up with the historic “Hands of Your God” where the scene is set. Brazen guitar work and raw vocals give voice to the despair and frustration Dracula experiences as his love is taken from him and a new chapter of his undead life is born. Bitter, blood dripping, no holds barred revenge is on the menu and no man, woman or child is exempt from his sights. The sound set is brought to life with the airy crashing of waves and thunder. The clang of bells and an old fashioned guitar sequence lull the listener into the story and all the rage held within. Scrabbling for his existence, Dracula consumes humanity. It is a judgment day filled with Hellfire.

The second piece on the album is one of the more widely known songs. “Walking on Water” sees Dracula embracing his new role as the purveyor of death and immortality. Darkness has taken him. There is no soul left and nothing save for the rage consuming him from within. Wearing the devil’s mark, he promises damnation for all. The grinding vocals give a shiver down the spine as the true face of evil begins to emerge, purely shameless in his glory and grandeur.

As the album progresses, a story is told, ending finally with “Under the Gun.” Doomed by his temptation Dracula despairs of his endless path as he is joined by a female vocalist. Love and blood join as a shadowy romance eternal in darkness push the couple on their jagged path through guitar riffs and a beat that will haunt your dreams.

This album was like watching a movie. All the great elements of the perfect show are all right here. Impassioned characters fighting against their fates, love, darkness and some kick ass music to fall into. If this album were a drink, it would be a salted caramel mocha. Salty and sweet at the same time, with a hidden punch that livens the blood. Jørn Lande and Trond Holter have outdone themselves with this production and any horror lover is going to want to have this in their collection. Dracula fan that I am, I fell in love with the cinematic nature of the vocals and the strong instrumentation behind it. There is a swing in this album to be sure, just watch the turns on the dance floor…you might slip in a pool of blood.

Key Tracks: Walking on Water, Hands of Your God, Under the Gun