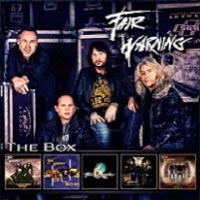 The Boxwould not be complete without their 1998 live album, Live and More.  It features a healthy sampling of songs from their first three albums, Fair Warning, Rainmaker, and Go!. The songs “Angels of Heaven,” “I’ll Be There,” “Man on the Moon,” and “Follow My Heart” represent the Go! era.  They all sound very good compared to the album versions with an almost studio quality in sound. “Don’t Give Up,”, “Desert Song,” “Get A Little Closer,” “Stars and the Moon,” and “Guitar Solo/Burning Heart” give a good overview of Rainmaker, showing off their early 90s sound. There is some really fine album-oriented melodic rock in these songs, and the guitar in “Burning Heart” is just killer. If one thing is clear from Live and More, it is that these guys really know how to put on a show!
If you are looking for a good deal, then Fair Warning’s The Box is the way to go.  With over five hours of quality hard rock that spans roughly two decades of music, it is a must have for fans of the genre.  This is also a chance to get to know a group that might have flown under your radar back then, because they are worth it.
4.5/5 Stars
Key Tracks: Angels of Heaven, Sailing Home, For the Young, Don’t Keep Me Waiting, Here Comes The Heartache
Brian McKinnon
January 10, 2015
Review Provided By Write A Music Review
Posted by Keith "MuzikMan" Hannaleck at 1/10/2015