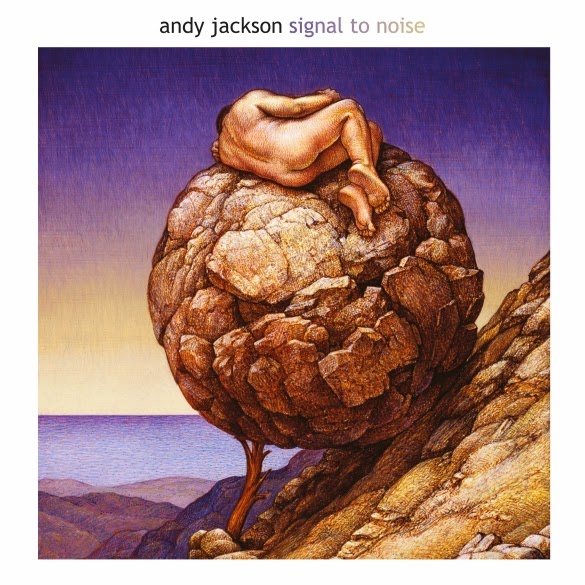 London, UK - Esoteric Antenna is pleased to announce the release of “SIGNAL TO NOISE”, the new studio album by twice Grammy nominated PINK FLOYD engineer ANDY JACKSON. “Signal to Noise” is a fine, modern, progressive work, which draws on Andy Jackson’s exemplary work as an engineer and producer. Besides being an allusion to Andy’s sound engineering background, the title refers to many of the lyrical themes of the album. Andy explains; “The album reflects on the sorting of what is important in life from the humdrum of everyday existence, and is in itself an analogy for the process of the creation of the album”.

Andy Jackson began his career at Utopia Studios in London, training under James Guthrie, a relationship that continues to this day with the duo being co-pilots of Pink Floyd’s sound. Andy had success as a recording engineer at Utopia, including hits with Boomtown Rats “I Don’t Like Mondays”, before the call came from James Guthrie to follow him into the world of Pink Floyd, to work on the film of “The Wall”, an offer he couldn’t resist, having been a Floyd fan for many years. So started a relationship that continues to this day, (on albums such as “The Final Cut”, “A Momentary Lapse of Reason”, “The Division Bell”, “Pulse”, Roger Waters’ “The Pros and Cons of Hitchhiking”, David Gilmour’s “About Face”, “On An Island”, “Live in Gdansk”), resulting in two Grammy nominations for his work and Mix magazine’s award for best live sound engineer for “Pulse” tour. He is also engineer and a co-producer of the soon-to-be-released Pink Floyd album, “The Endless River”.

Along side his work with Pink Floyd and wider work as an engineer, he has recorded three albums, recorded with friends, as a musician in his own right: “On the Surface”, “Obvious” and “Mythical Burrowing Animals”. All three works were ideas ahead of their time it would seem. He did find time along the way to produce work for other artists, including the seminal British Goth band Fields Of The Nephilim. This again was the genesis of a relationship that would lead to the present day, after ex Nephilim Tony Pettitt asked Andy to join his new band The Eden House as guitarist. After three years with Eden House, Andy felt it was time to move on & embark on a new challenge of a completely solo album project. This has lead to the creation of the “Signal to Noise” album, a wonderful sonic experience that is sure to Andy Jackson heralded as a significant creative force in modern Progressive music.

1. The Boy in the Forest
2. One More Push
3. Invisible Colours
4. Spray Paint
5. Herman at the Fountain
6. It All Came Crashing Down
7. Brownian Motion