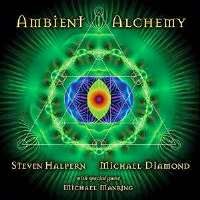 Steven Halpern is well known for his work using music as a healing tool. In his latest album Ambient Alchemy with talented producer and artist Michael Diamond and guest Michael Manring, he takes the alchemy of sound and ratchets it up into a spectral place of ambient effects and flowing symmetries of audible experience.
The first track on the album is “Ambient Alchemy.” A blend of ambient sound, flute and multi instrumentation takes the listener far inside themselves. Chimes flit in and out as the cloudscape changes, becoming adrift in a sea of peaceful resonance.
“Rain Dream” has to be one of my most favorite tracks on the album. As I set my iPad up to play the song, my dogs’ ears perked up thinking it was actually raining with the natural effects used in the piece. Ambient sounds, percussion elements and electronica took me into a place of relaxation that I sorely needed after a month of hard core deadlines. It even put my dogs to sleep and that is a feat worthy of praise. My writing cave can sometimes be compared to the story about the monkeys jumping on the bed. In my case it would be dogs and now the dogs are sleeping happily to the sound of rain, chimes and electric guitar. Wonderment…sheer bliss.
“Atlantis Revisited” is the last track of an album I was sad to get to the end of. Electric guitar, ambient softness and a pleasant hum reached beneath the waves of my mind and found a lost place beneath the tides. It is a swimmy sensation of weightless meditation that reaches beyond the mundane world and into something more. Something that echoes of eternity and ancient civilizations that will never truly be lost, if only because of our ardent belief that they still exist somewhere in time.
Steve Halpern is a Grammy nominated award winning composer, artist and healer of minds and souls. His music has gone beyond the pale to help people battle depression and illness, making him a leader in the industry. His new work with Michael Diamond, a producer and recording artist in his own right and voting member of the Grammy’s, along with guest artist Michael Manring is an album rich with healing energy and is sure to be a hit with anyone who enjoys respite away from the everyday world. Take a walk with the healing energies of Ambient Alchemy and let it cast a spell over you.
5/5 Stars
Key Tracks: Ambient Alchemy, Rain Dream, Atlantis Revisited