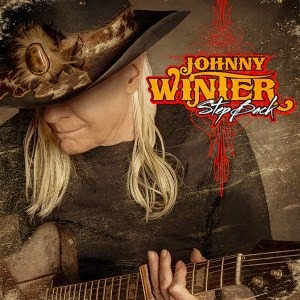 July 16, 2014 is a day in the history of the blues that is forever etched upon our minds. We lost Johnny Winter, one of the greatest blues guitar players to ever step on stage. His contribution to the genre cannot be summed up in short order. His legacy of music is one of the pillars of strength that keep the blues alive and well.
Fortunately for music fans he completed his final album before passing away and it will likely go down as one of his very best. Step Back is a guitar hero tribute, not just for Johnny but for those players that admired him and had the honor of being part of the project.
The list is impressive. Of course his longtime guitarist/producer and best friend Paul Nelson (read the recent interview) who came up with concept of the album and also contributed guitar parts, was a huge part of this. The guests include Joe Perry, Eric Clapton, Billy Gibbons, Jason Ricci, Ben Harper, Leslie West, Dr. John, Joe Bonamassa and Brian Setzer.
Winter’s voice is strong throughout and his guitar playing is clear and concise. The opening track “Unchain My Heart” is vintage Winter as his guitar moans and screams for release. The Blues Brothers Horns add the extra element to give it more feeling and depth.
“Don’t Want No Woman” has to be one of the highlights with another blues legend Eric Clapton, going toe to toe with Johnny. When it comes to the blues it’s all about lovers lost and various other life predicaments. The vocals and guitar playing are what supports those stories perfectly. It does not get any better than this. “Who Do You Love,” the classic tune covered by so many artists over the years, has some smokin’ hot slide guitar riffs that completely “Winterize” it. “Okie Dokie Stomp” is a rollicking instrumental with Brian Setzer that takes Winter back to his roots in Texas. It really is a rockabilly stomp to die for. Lighting fast guitar riffs and a locomotive rhythm section make this one unforgettable.
Another blues burner for the ages is “Mojo Hand” with Joe Perry and Billy Gibbons. This is the best track on the album. Winter sounds so vital and strong and with the helping hand of two other legends, the track just cooks along like a well-oiled machine. This is blues rock at its very zenith. Those are some of the highlights from 13 tracks of pure energized blues from one of the masters of the trade. I heard no weak points throughout the run of this album.
Winter was always a star and before he left this earth he burned as bright as ever with Step Back. I believe he will finally get his Grammy with this monumental accomplishment. As it is with many of the greats that have come and gone, his big moment in the sun will likely come now that he is gone. When that hardware is presented he won’t be here to accept it but will certainly be watching from afar with a big grin.
Long live the blues and the music of Johnny Winter; this was one hell of an exit for one of the greatest guitar players on the planet.
5/5 Stars
Key Tracks: Mojo Hand , Don’t Want No Woman, Unchain My Heart