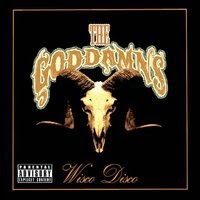 It is bands such as The Goddamns that make listening to music worth it. They are the type of band where everything sounds so right and natural that it is as if they were put on this planet with a mission to play.  Hailing from Wisconsin, this band is a two-headed monster of supreme music making. With Grand Master O.Z. on drums and Reverend Meantooth on guitar and vocal duties, The Goddamns are one band that demands to be heard and not soon to be forgotten. Their brash blend of blues and rock and a little something spicy thrown in combine for an explosive musical experience. Wisco Diso is an album that will delight with its sweaty, unpolished, and honest sound.
The opener and title track “Wisco Disco” sets an impressive tone. With its rough around the edges sound, devil-may-care attitude, and groovy guitar and pulsating drums, “Wisco Disco” is the perfect introduction to their music and this album. If you like this song, then it is a good bet that you will adore the rest of what is to come. “Shitty Ex Girlfriend” makes for one helluva song with its sensual guitar riff and hypnotic drumming. The song also has a good sense of humor in the lyrics, making it a perfect post-breakup song.
The slow the pace down a bit for “Now She’s Gone” with some thick, choppy riffs and calculated drumming. Also, I have to say for just two guys, that they have for real loud and full sound, as if there were more members in the band. “Untitled” starts will a jolt of energy that really hits the spot and keeps it going at a nice pace. You might find it hard to sit still during this song.
With its crashing drums and methodical guitar playing, “Pa Shot Ma” is a nice example of the effectiveness of simple storytelling when said tale is backed by memorable music. It becomes hard to separate the two. Once the song starts, I can hear the lyrics before their even sung. “Turpentine – Wade in the Water” is another rocking song and great example of their mix of rock and blues sound. “Goddamn” is a bit punk, a bit rock, and all attitude. They played out all the stops on this one and it has become my favorite on the album. It is a balls to the wall song that makes for an excellent finish.
The Goddamns’ Wisco Disco is one smoking album. These guys are the real deal. If you have not heard of them yet, then this release will make stand up and take some serious notice. They are sure to amass a big following. This is the type of music that seeps into a place and becomes a part of its fabric. They leave it all on the floor – blood, sweat, and beer.
4.5/5 Stars
Key Tracks: Wisco Disco, Untitled, Goddamn
Tracks:
1.Wisco Disco
2.Shitty Ex Girlfriend
3.Now She’s Gone
4.Untitled
5.Pa Shot Ma
6.Turpentine – Wade in the Water
7. Goddamn
Brian McKinnon
October 1, 2014
Review Provided By Write A Music Review

Sell music on itunes at ReverbNation.com
Posted by Keith "MuzikMan" Hannaleck at 10/01/2014