Rock-Pop Review: Elvis Presley-That’s The Way It Is (Deluxe Edition) 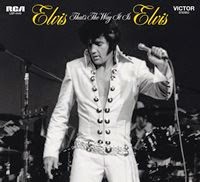 The Elvis Presley music just keeps coming and for fans of the King it’s always a great day when new music is unearthed from the archives. That’s The Way It Is (Deluxe Edition) continues that tradition. The set comes in the 2 CD Deluxe Edition and an expanded 8 CD/2 DVD set.
I am a fan of Elvis and I have had the pleasure of checking out the digital version of the larger set and enjoying all the footage on the DVD. I especially enjoyed the “fly on the wall” footage of Presley in the studio with his band and witnessing every day conversations. Even though he was a huge star I could see how he set people at ease with his demeanor. I would think the diehard fan would love the expanded set and the casual fan would go for the regular release. Either way you get a good glimpse of Elvis hitting his stride and some added bonuses along the way. One of the bonuses includes the accompanying booklet with several pictures and a fantastic write up from Warren Zanes about this critical juncture in Presley’s career.
Other added treats include outtakes and original singles culled from the sessions and of course the amazing live shows. In his third decade of recording the man was at the top of his game and you bear witness to that incredible talent and energy he commanded in the studio and on stage.
The sound quality is superb on this set. They did an excellent job of remastering the original tapes, bringing the legend of Elvis out of your stereo system directly into your room where your stereo resides.
The best part is you get it all with this deluxe set, the original album outtakes, the original singles then the opening night performance in Las Vegas. The venue held 2,000 seats so he was able to move around, mingle in the crowd, and kiss all the ladies. Folks who managed him were surprised he did that. In this instance Elvis was so happy about the music and overall performance that he was transferring that joy to his audience like never before. This was 1970 when we lived in different world and Presley was a world renowned star, once again reminding everyone of the power and magnitude of his music.
If you are a fan of Elvis Presley’s music you most certainly will recognize many of the tracks. This will also serve as a good introduction to his music as any I have ever heard. This is one more reminder that there will never be another one like Elvis to grace the stages or recording studios. Performers like this will be forever in our hearts and minds for their originality and unique charisma and appeal to their audiences.
What I have come to appreciate over the years is the versatility of Elvis and the musicians that performed with him. There was a time in my life that I was not paying attention but that changed several years ago and now I can fully understand the impact and far reaching influence this performer had on music as a whole.