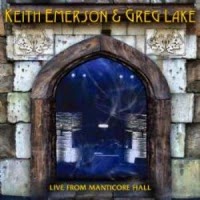 This particular duo require very little in the way of an introduction, as they completed 2/3rds of one of the biggest names in symphonic prog, Emerson, Lake and Palmer, or ELP. This live recording from 2010, Live From Manticore Hall, brings together Keith Emerson (keyboards) and Greg Lake (vocals, bass, electric and acoustic guitars), with a selection of ELP compositions from the albums, Emerson, Lake and Palmer (1970), Tarkus (1971), Trilogy (1972) and Works Vol 1 (1977). The duo also covers a track from the very first King Crimson album, In The Court Of The Crimson King, with Greg being a member of that band at the time.
There is an explanation of the origins and reason behind this particular release, given by Greg on the album, but I will briefly give the information here. The album, Live From Manticore Hall, came about when Keith and Greg were writing together in 2010 and did some versions of older ELP songs to relax and unwind, with both deciding that what was happening could translate very well to an intimate style concert. What you will find on this album are instantly recognizable tunes, but with some experimentation and new slants.
Live From Manticore Hall, is a 10 track live album with a running time of around 77 minutes. The longest track on offer is a version of “Tarkus” stretching out over the 17 minute point, (17:08), with the “Introduction” being the shortest track at just over a minute (1:05).
The opening track on Live From Manticore Hall is the aptly titled, “From The Beginning” (6:09) which has a majestic keyboard introduction from Keith with that instantly recognizable voice of Greg appearing around the 1:30 minute mark. This song flows along so well with the superb guitar of Greg and the piano of Keith adding a slightly different sound to the original. What comes across quickly from this track is how intimate and relaxed the whole atmosphere of this gig is.
“Introduction” (1:05) does exactly what it suggests and leads into the track “I Talk To The Wind” (5:33) from the debut album by King Crimson, and as Greg explains, he had not sung live since 1969. Stunning piano by Keith sets the scene for this beautiful rendition of what is one of my favorite tracks from In The Court Of The Crimson King album. Yet again the powerful timbre of Greg’s voice “nails” the vocals, even after 41 years. This is a re-visitation of an old song, but set in a slightly different style which adds to the class of the original.
“Bitches  Crystal” (6:18), “The Barbarian” (6:22) and “Take A Pebble” (5:20) then follow, with the first having an intro from Keith explaining how he and Greg met up when sharing the billing at the Fillmore West in 1969, as members of The Nice and King Crimson respectively. “Bitches Crystal” highlights the two great showmen on offer on this album, with stunning keyboards and superb vocals/guitar, before moving on to “The Barbarian” which has classic keyboards from the off, and can still send shivers up your spine. “Take A Pebble” gets an explanation as to how it came about from Greg, before they settle into the song with more pristine piano by Keith and lyrics being delivered in crystal clear vocals by Greg.
“Tarkus” (17:08) is a slimmed down version of the title track from the album released in 1971, which ran on for over 20 minutes. As with all the tracks on the album, these revamped versions add to the originals by allowing superb keyboards and guitar interplay to breathe new life into the old classics.
Next up is the beautiful “C’est La Vie” (6:01) from the Works album and there is a nice little bit of info that Johnny Halliday covered the song and had a French No 1. The acoustic guitar, the voice and the atmosphere make this a simply amazing track.
The penultimate track, “Pirates” (13:30) is also from the Works album and was the “epic” track from that release. The spoken word intro, blending in to the keyboards, drums and bass, produce a superb grandiose chunk of music, which ebbs and flows, recalling vividly the atmosphere of sailing ships and battles.
The finale to the album, Live From Manticore Hall, is the majestic “Lucky Man” (10:35), again with a little intro by Greg. The start allows Keith to show his skills on the moog (apparently the original instrument used in the recording) before the song gets properly started. The moog solo goes on for about 1:40 minutes before the piano takes over, building towards the actual song which appears around 5:30 minutes, with Greg’s guitar and vocal taking center stage. As the song progresses, the moog reappears, as it does on the original and Keith takes the track out to rapturous applause.
Live From Manticore Hall is a superb album, showcasing two giants of the “classic prog” era, but with the twist that the songs are not note for note covers, but, dare I say it, two more mature musicians putting a more mature slant on the music. The atmosphere simply exudes the feeling of laid back relaxation, which Keith and Greg seem to have immersed themselves in, and the whole album simply flows.
The advice for this album is to settle comfortably into a seat and listen to Live From Manticore Hall several times, and be astounded at how “fresh” these old tracks sound. “One To Buy” and “The Experience Will Last Forever” stickers adorn the front cover and this should be a perfect addition to any prog collection.
5/5 Stars
Key Tracks: From The Beginning, I Talk To The Wind, Lucky Man
Jim “The Ancient One” Lawson-Sr. Reviewer Prog Rock Music Talk
September 30, 2014
Review Provided By Prog Rock Music Talk
Posted by Keith "MuzikMan" Hannaleck at 9/30/2014