Heavy Metal/Rock Review: Jesters of Destiny-Fun at the Funeral 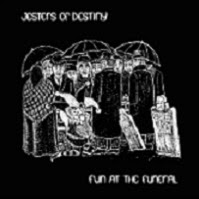 If you never have heard of Jesters of Destiny, then you are not alone.  This heavy metal band from Los Angeles, California were together for only a few years during the mid-80s.  Their final line-up consisted of Bruce Duff (bass, vocals), Dave Kuzma (drums), Michael Montano (guitars), and Ray Violet (keyboards, guitars), and Brian Butler (guitar), Bill Irvin (guitar), Eric Carlson (guitar) of The Mentors, and Louie Schilling (drums).   During their time together as a band, they were able to put out only one album, 1986’s Fun at the Funeral, and an EP, 1987’s In a Nostalgic Mood, so they did not make as big a splash in the music world as they hoped.  They heavy metal ambitions eventually crumbed for good by an unstable line-up and, the nail in the coffin, before being dropped from their record label.
They leave an interesting legacy behind with Fun at the Funeral. Jesters of Destiny were more than your typical metal band of the time period, incorporating hard rock and psychedelic influences in their music. A little rough around the edge, their music is some of most intriguing that I have listened to of late. The opener, “Diggin’ That Grave” is an example of this.  It is does not start off sounding like your typical heavy metal with its spacey sounding bass, and hard rock guitar.  The keyboards add an extra “out there” vibe.  With lines like “It’s beyond heavy metal,” they might as well be describing their sound.  “God Told Me To” is more of a straight metal song with some sweet guitar parts.  “Love Theme” is a short, somber, and serene interlude. It is dreamlike in quality.
Inspired by circumstances arising from the bandmates having neighboring apartments, “I Hate Bruce” is a fast paced song that really rocks.  Featured on the metal compilation album 1984’s Metal Massacre V, “End of Time” has the honor of being the first song recorded by the group.  It is one hard-hitting apocalyptic song.  “Attack of the Jesters” is another short interlude that is heavy on the psychedelic influences.  “Incubus” is pulsing with energy and I think I hear some punk elements in this one.  Jesters of Destiny were not ones who were afraid of experimenting with mixing different genres. “Happy Times” is an up-beat, almost pop-sounding, song.  “Crimson Umbrella” is completely infectious.  It is hard not to have the chorus running through your mind, and it has a guitar part that will stun and daze.  “Love Dust” and “Ray’s Theme” bring it on home.  The former with a pretty booming overall sound and shredding guitars, with the latter being a mashup of old time sound bites that I could do without.
Jesters of Destiny’s Fun at the Funeral is an interesting album that probably came out too soon for it to catch on.  Given some time to really nail their sound down and ditch the numerous interludes, they could have been much bigger.  Like many pioneers, they arrived too early to prosper and reap the rewards of those yet to come.  Fun at the Funeral remains their legacy and a reminder of a bold experiment.
4/5 Stars
Key Tracks: Diggin’ That Grave, End of Time, Crimson Umbrella