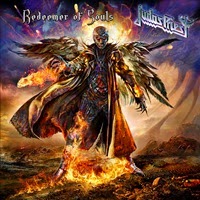 It’s hard to imagine that 6 years has passed since Judas Priest released their double album Nostradamus. Some fans found that a tough one to swallow because they tried something different. I applauded it and thought it was a true masterpiece. Then K.K. Downing retired and we thought what now? Then another live album arrived titled A Touch of Evil a year later introducing their new guitarist Richie Faulkner. Again I thought this was another good move for the band to keep things rolling and Faulkner seemed to be a good fit. Once Faulkner got his chops down and did some touring with the band it was time to step back into the studio to see how that worked without Downing for the first time.

So now we have Redeemer of Souls which by all accounts is a return to form and I could not agree more. There are three editions of this release available, the regular one CD package, the deluxe two CD set and the double vinyl LP version. I decided, as I always do, to go for the gusto and get the deluxe CD version. I was glad I did as I found out the bonus CD is like an entirely different album, not some out takes or unreleased live material (like most bonus tracks are). I also received the LP version for review which was another added bonus that I welcomed.

The album art by Mark Wilkinson is eye catching and prolific and very “metal” so we are off to a good start. As the album begins then explodes with the onset of the opener “Dragonaut,” Halford belts out “Welcome to my world of steel, master of my domain, cower as the pain’s unsealed, disasters where I reign.” You get the idea; the heavy metal music that goes hand in hand with the lyrics is a guarantee. How else would we want it? This music is like a battering ram straight between the eyes, perfect!

How many metal albums have 5 tracks that nearly reach the 10 minute mark? You will be hearing one if you pick this up. The first CD is powerful set with some excellent musicianship and being a long time Priest fan and one of their biggest supporters I was not disappointed in one track. The title track is amazing, sweeping, energized heavy metal; it does not get any better than that track. “Halls of Valhalla” is another beast, an epic track with all the glory of a warrior’s promise to reach the place of their calling after doing what they were destined to do, die in battle. Halford remains a wonder at his age and his ability to sing a song just as he always did. Priest would be a shadow of itself without him at the helm and we all know that.

The interplay of Faulkner and Tipton is quite the pairing and every bit as satisfying as the previous lineup. You cannot deny how strong this release is. Let us not forget the rock solid bottom end of this lineup with Ian Hill (bass) and Scott Travis (drums). Perhaps one of the best examples of that powerful duo on display is the hammer of the gods coming down in “Sword of Damocles.” If you were wondering, that phrase is a figure featured in a single moral anecdote, an allusion to imminent and ever-present peril faced by those in positions of power.

“March of the Damned” continues along the same lines as the preceding tracks. Its thunderous bass lines and juggernaut drums followed by beefy hard rock guitars are well suited to the doom and gloom of the lyrical content. And so it goes throughout the first disc, like a steamroller on mission, wave after wave of heavy metal comes at you. It is classic Priest jugging along at their very best. The first CD is relentless in its power and scope. This is a showcase of a heavy metal band hitting its stride and shining at all positions. By now I am wondering when I will hear a weaker track or one that I can say I don’t really like but that time never arrives. “Cold Blooded” and “Metalizer” continue to hammer away at your consciousness shaking you down inside and out. If you turn up the stereo with this music you are subject to shaking walls and shattered ear drums so heed the warning my metal head friends…or just go ahead and crank it and enjoy, I did.

What may come as a big surprise to fans are the bluesy roots in “Crossfire.” It is Priest because you have Halford on the vocals but if you had a different vocalist you would not know it was the same band. I have to say I thought the change was welcome and I loved the song. Some of it has the patented heavy riffs entering the mix but this one is real different and it shows how talented and diverse these musicians can be. This band is certainly not one dimensional.

The bonus CD was intended to be enjoyed as an entirely different album and it sounds that way. This is more of the classic Priest during the earlier years such as British Steel. The energy and power does not subside a bit so don’t worry. What you get is another side of Priest but the volume does not get turned down one iota.

As I made my way through the second disc, I became even more exhilarated by what I was hearing. “Snakebite” is excellent with Halford spewing out the venom of the past, giving the new fans a taste of where this band came from so long ago. It’s only four tracks but they pack a powerful punch and it’s well worth the additional investment to add them to your collection.

I also listened to the 180 gram vinyl edition of the album (minus the bonus tracks) and it sounds fantastic. You won’t be missing anything here; there is no sacrifice for quality of sound. Judas Priest sounds good in any format however this type of music is well suited to vinyl and it always was.

This heavy metal carries on the tradition of Judas Priest and it will surely bring in more fans by the masses once they hear this music. It is one of their strongest efforts since the release of Screaming for Vengeance in 1982. If you love metal just make sure you get this!