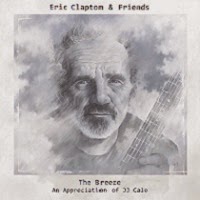 When it comes to guitarist, it is hard to do better than Eric Clapton.  Some might say there is no one better.  The former member of influential bands such as The Yardbirds and Cream, Clapton has come together with other music stars to pay tribute to a fallen friend.  J.J. Cale was a singer and song writer, who was one of the founders and main driving force behind what is known as the Tulsa sound, a mix of jazz, blues, rock, and country.  His songs have been covered by the likes of Eric Clapton, Jerry Garcia, Phish, John Mayer, Lynyrd Skynyrd, and Johnny Cash.
A year after he died of heart failure in 2013 at the age of 74, Eric Clapton gathered other music greats to pay their respects by covering Cale’s songs.  Joining Clapton on this album are Tom Petty, Mark Knoplfer, Don White, John Mayer, Derek Trucks, and Willie Nelson.
Eric Clapton takes the reigns solo on the first track. “Call Me the Breeze” is not only the perfect song to open this album, but it is also the perfect introduction to the music and sound of J.J. Cale.  From the very beginning, it is simply enchanting, and captures exactly what Cale meant when he referred to his style of music as “laid back.”  Its carefree attitude makes it a choice selection in these end of summer days.  Tom Petty joins Clapton on “Rock and Roll Records,” making for a smooth and pleasant song. Clapton and John Mayer come together for the bluesy “Lies.”
Don White adds a sensual atmosphere to the low-key “Sensitive Kind.”  Clapton returns for a great rendition of “Cajun Moon.” It has some pop and sizzle to it and brings the tempo back up.  Twinging with a sense of melancholy, “Magnolia” is an emotional, heartbreaking love song.  Petty and Clapton bring the mood back up with some wonder guitar harmony on “I Got the Same Old Blues.”  “Songbird” is a remarkable, standout song thanks to the distinct and powerful vocals of Willie Nelson.
Clapton and White share vocal duties on “I’ll Be There (If You Ever Want Me),” a hopping up-beat country song.  Tom Petty does his best to steal the show on “The Old Man and Me” with his quiet, whispery vocals.  Mark Knopfler, White, and Clapton make their case for best song on the album with the lively and harmonious “Train to Nowhere.”  It also has a killer harmonica on it.  Mayer returns one last time on “Don’t Wait” for some searing guitar work. Featuring Derek Trucks and Christine Cale, “Crying Eyes” brings the album on home for a strong finish.
Eric Clapton and Friends’ The Breeze (An Appreciation of J.J. Cale) is a wonderful album and tribute to a fallen friend.  It does its job of not only honoring the man’s life work, but it also the type of album that can bring in a new generation of fans.  This album is truly a labor of love done by friends.
4.5/5 Stars
Key Tracks: Call Me the Breeze, Songbird, Train to Nowhere