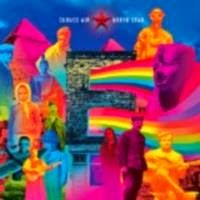 Curved Air, the British Prog Rock band, came into being in 1970, formed from musicians from mixed artistic backgrounds which included classical, folk and electronic. Recently I reviewed Airwaves (Live at the BBC) by the band, which was an album of live recordings made between 1970 and 1976, but what is on the table for review now, is a new studio album, North Star. The first Curved Air studio album was released in 1970, Air Conditioning, and was one of the first “picture disc” releases and North Star is the 7th studio album, released 38 years after Airborne, album number 6 from 1976.
Curved Air at present is a 6 piece band comprising Sonja Kristina Linwood (vocals), Florian Pilkington-Miksa (drums), Kirby Gregory (guitars), Chris Harris (bass), Robert Norton (keyboards) and Paul Sax (violin). Sonja and Florian were original members back in 1970, Chris joined in 2008, Robert and Paul in 2009 and Kirby, who was briefly a member in 72/73, joined again in 2012.

North Staris a 14 track album which has a total running time of around 75 minutes. The penultimate track, “Young Mother” is the longest on the album, running on to 6:45 minutes, with the opening track, “Stay Human” the shortest at 3:50 minutes. The album comprises 7 new tracks, 3 from earlier Curved Air albums (1 from Air Conditioning in 1970 and 2 from Second Album from 1971), 1 track from a 1980 solo release by Sonja and 3 cover versions of songs by The Police, Snow Patrol and The Beatles.

The opening track on North Star, “Stay Human” (3:50) is an excellent introduction to the album. Chunky guitar, drums and electric violin followed by the characteristic voice of Sonja Kristina, make the track sound like vintage 70’s Curved Air. The track motors along perfectly dovetailing the old and new style of Curved Air and crams much more into under 4 minutes than would seem possible.

“Time Games” (6:24) is highlighted by a solid rhythm unit, great guitar and that soaring violin. Sonja’s voice floats above the music and there is an excellent section of interplay involving the guitar and violin. “Puppets” (5:20) follows and dates back to 1971, but due to the skill of the musicians involved, it doesn’t have the feel of an old song. Track 4, “Images and Signs” (4:39) is more of a slow burner with the guitar and violin again to the fore. “Interplay” (5:41) has a standout guitar section courtesy of Kirby Gregory which is superb and also has stunning violin and piano work.

The next track is an instrumental, “Spider” (4:39) which “reeks” of 70’s style allowing bass, guitar, violin and keyboards to dovetail superbly. “Magnetism” (6:32) is another differently styled track with a fairly standard drum/bass foundation, but with a more “whispered” double tracked vocal, leading into a short violin passage which then repeats. The time change around 2:45 minutes pits the keyboards against the violin, with the keyboard passages superb and again the opportunity arises for Kirby to show his mastery of the guitar in a longish passage.

“Colder than a Rose in Snow” (4:26) is a melancholic, emotive song from a Sonja Kristina solo album, followed by “Old Time News” (5:08) which is an up-tempo track featuring those chunky guitar passages and stunning violin sections. “Situations” (6:14) and “Young Mother” (6:45) are re-workings from earlier Curved Air albums, but both straddle the decades with ease. None of the “old” material on the album sounds dated and fits in seamlessly with the “new” tracks.

The only thing about this album I am unsure of is the need to have the three cover versions included. “Spirits in the Material World” (4:58), “Chasing Cars” (4:54) and “Across the Universe” (4:20) are all very competently performed, but I don’t feel that they add anything to the album. They are presented in a very different style to the rest of the album.

North Staris a superb new album from Curved Air with the new material and the selected oldies highlighting the classic Curved Air sound, a sound that has been missing for too long a time. North Star is certainly a hugely satisfying listen, with little hooks throughout, meaning that you latch onto tracks, even on only one hearing. Both stickers are adorning this release, “One to Buy” and “The Experience will last forever” and my advice is simply to go out and purchase it, swiftly.