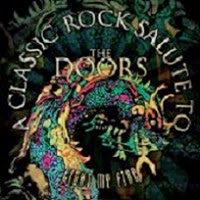 When it comes to the great music makers of the late 60s and early 70s, there is no question that The Doors is among them.  Formed in Los Angeles, California in 1965, The Doors were Jim Morrison (vocals), Ray Manzarek (keyboards), Robby Krieger (guitar), and John Densmore (drums).  Taking their name from the Aldous Huxley’s book about experimenting with mescaline, The Doors would go on to be of the most influential and controversial bands of their generation, and, not to forget, one of the most successful, selling over 100 million albums worldwide since their self-titled debut was released in 1967.
Led by their charismatic front man, The Doors took the rock world with gusto, topping the charts with hit records and songs.  At the forefront of the 60s counterculture movement, they were no stranger to controversy.  Refusing to bow to a call for censorship saw them banned from The Ed Sullivan Show after one performance.  After playing their #1 hit song “Light My Fire” without the recommended studio changes, the producers informed the band that they would never to play on the show again. An unfazed Morrison replied: "Hey man. We just didthe Sullivan Show."  Unfortunately, rock stardom caught up Morrison, who died in Paris of a drug overdose in 1971.  The remaining members would release two more albums before disbanding.  Though they spent less than a decade together, the incredible music that they made together lives on.
Light My Fire – A Classic Rock Salute to The Doorsplays to tribute to The Doors endearing legacy.  Produced by former Yes member Billy Sherwood, the appearing musicians read like a Who’s Who of the classic rock world.  The album features appearances by Jimi Jamison, Lou Gramm, Ian Gillian, Pat Travers, Chick Churchill, Todd Rundgren, Geoff Downes, Steve Howe, and many others.
Light My Fire – A Classic Rock Salute to The Doorsis at its best when there is a lot of energy put into the song, such as the opening track “L.A. Woman.”  It is one of the better songs on the album and is a sharp and crisp rendition. “Roadhouse Blues” is another song that sounds amazing and is a real testament to the type of quality that can be found on the album.  “Intro (People Are Strange)” is another gem.  It is a piece of music that is interesting, creative, and unique.  Also, I think the album really hits its stride in its latter half with spirted performances from “Hello, I Love You” to “The End.”
It is no means a perfect album, though.  I think that some fans will prefer the original versions over some of these covers.  With bands as talented and iconic as The Doors, some things that they do on the originals are hard to duplicate, the heights too high to reach.  Also, there is an issue of overproduction on some of the songs, such as “People Are Strange.” The music sounds too slick and polished, too much like some of the modern stuff being pumped out.  It did not get in the way much of me enjoying the album, though.
Light My Fire: A Classic Rock Salute to The Doors is one of the better tribute albums that I have heard.  It is full of gifted musicians who love the music and it shows in their efforts.  I would not suggest this as an introduction to the band if you are new to their music.  I do recommend this to classic rock fans and The Doors fans, of course.  It makes for a nice addition to the collection and keeps The Doors legacy going strong.