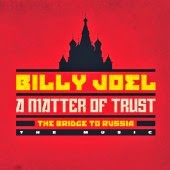 Billy Joel, music icon, father, and ambassador. Wait, ambassador? That is correct!  In 1987 he was an ambassador for the U.S and music when he arrived in Russia to perform concerts. A Matter of Trust-The Bridge To Russia is a 2 CD/2 DVD set that documents his visit handsomely.
I have enjoyed this man’s music since the 70s when I bought his mega hit single “Piano Man” to spin on my record player. He has been one of the most consistently good artists for over four decades. He has that New York state of mind and it has always worked well for him. He wears his heart on his sleeve and his music has the energy and swagger of that great city.
A Matter of Trust-The Bridge To Russia The Concert(DVD or Blu-ray) contains newly restored and remastered material from Live In Leningrad, 1987, a full-length concert film that has been unseen since its VHS release (VHS seems so antiquated now). For its DVD and Blu-ray debut, the concert has been remastered from the original 35 millimeter negative and expanded to include 12 previously unreleased performances, more than doubling the running time of the original release! Joel fans will find this to be a treasure trove of delights and a slice of music history that few artists can say they were part of.
The set is also available in a Deluxe Edition boxed set containing a full-length concert film (The Concert) on DVD or Blu-ray; a 2CD album featuring previously unreleased tracks and bonus material; and, as an exclusive, the Showtime documentary film chronicling Billy's 1987 Soviet Tour. In addition, the Deluxe Editioncomes with a book containing rare photos and new liner notes including first-hand accounts from writers and journalists who were there. The set I was fortunate enough to have enjoyed has everything but the book included.
I would highly recommend watching the documentary of the visit to Russia then watching the concert. For this fan it was interesting and revelatory to say the least. I did not know a thing about the journey Joel, his family and band took until I watched the documentary. It helped me to understand the importance and timing of his visit. The timing was perfect as things were just starting to change there and the music not only represented an artist from the U.S, it meant so much more to the people there. It was an expression of feelings and freedom and they finally had a chance to let their hair down, stomp their feet and hoot and holler. Joel was the catalyst for that and perhaps much of the change that was to come after he left.
The live performances are full of hot n’ sweaty angst and feasibly that is just how the audience felt with their lives at the time. What Billy understood was that the Russian people did not want to fight us, they wanted to get to know us better and adopt a democratic society as we have always enjoyed here, thanks to the millions that have died and suffered in world wars and conflicts. Joel gave them a slice of American pie that they would never forget.
Joel was in good voice and the band was hitting on all their cylinders for these performances. The remastered video is fantastic and it spotlights a performer giving it his all every second. The audience knew that and they responded with a lot of appreciation and enthusiasm. It helped to have an interpreter on stage at some points so Joel could say what he wanted about certain songs, but for the most part the music did all the talking and it said a lot to those there listening even if a majority of them could not understand English. Joel was so emotional and expressive and the music just fueled his on stage persona.
This set is a document to the power of music and the courage and openness of a troubled people that found a way to open their arms to a U.S. rock star and let him know that they were no different than any other audience anywhere else in the world. Perhaps for Joel it holds a lot more meaning now then we can ever understand because we did not live the experience but this is the next best thing. I advise that you make sure you get your copy now and open your eyes and ears to a musical experience that you will be glad you had.
5/5 Stars
Key Tracks: ALL
Tracks:
A MATTER OF TRUST--THE BRIDGE TO RUSSIA: The Concert (DVD or Blu-ray)
01. Prelude/Angry Young Man
02. Allentown
03. Goodnight Saigon
04. Big Man On Mulberry Street
05. Baby Grand
06. An Innocent Man - previously unreleased
07. Honesty - previously unreleased
08. The Longest Time - previously unreleased
09. A Matter Of Trust
10. Only The Good Die Young
11. It's Still Rock And Roll To Me - previously unreleased
12. Sometimes A Fantasy - previously unreleased
13. You May Be Right - previously unreleased
14. Uptown Girl
15. Big Shot
16. Back In The U.S.S.R.