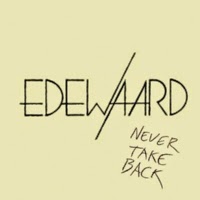 Edewaard (pronounced ED-ahh-ward) is a young Alternative Rock n' Roll band from Eugene, Oregon lead by the founder Matthew Edewaard. He began a solo project which eventually matured into the full 4-piece band that remains today. The band was officially formed in February, 2013.

This band has their own distinct alternative rock/pop sounds to offer up on their third release last year titled Never Take Back.

Matthew has a pleasant vocal style that matches up well with the musical compositions. This is a good thing as it doesn’t always work out that way. The songs are based around love and relationships, and all the things that happen in one’s life when other people are involved with your daily life.

“Holidays & Heartbreak” is off to a good start, setting the pace and formula for the recording. Then “Follow (So Sick)” takes a different road where Edewaard shows his vocal talents and singing at a pace that is nearly a rap. There are some good acoustic guitar passages that go beyond their alt rock pop sound and give it an entirely different flavor helping you to realize that this band has many different dimensions. Nobody wants to be placed into a little box and that track helps to clarify that there is more to this band than meets the eye or ears.

While the vocals are pretty much consistently the same tone and approach throughout I was able to appreciate the overall instrumentation, which at times were more advanced than one would expect with a young band. I must say that the album does tend to lean towards a formula that does not challenge their talents consistently and I think they need to do more of that. By the time you get to track 7 it starts all blending together and sounding the same and I think that is more due to the vocal style than anything.

Edewaard is band with a ton of potential and the ability to pump out one hit after another. Their chemistry is there and the talent and presentation is top notch. The sky is the limit and I look forward to seeing how far they can go with further development while starting to take some chances and stepping outside the box.
3.5/5 Stars