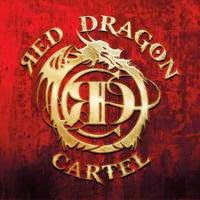 Jake E. Lee is no stranger to the rock game. He made a name for himself in the 80s as the guitarist for Ozzy Osbourne on 1983’s Bark at the Moon and 1986’s The Ultimate Sin. After being fired from Ozzy’s band, he went on to form Badlands with Ray Gillen, which lasted from the late 80s into the early 90s. He released his first solo album in 1996, the well-received A Fine Pink Mist. He stayed relatively quiet going into the new millennium and the years that followed, releasing solo albums in ’05, ’07, and ’08.  However, things could not remain the same forever.
Jake E. Lee is back with a bright new band called Red Dragon Cartel.  Red Dragon Cartel is Jake E. Lee (guitar), Ronnie Mancuso (bass), Darren James Smith (vocals), and Jonas Fairley (drums, backing vocals).  Their self-titled debut also features Cheap Trick’s Robin Zander, Iron Maiden’s original vocalist Paul Di'Anno, Rex Brown from Pantera, Five Finger Death Punch drummer Jeremy Spencer, and In This Moment vocalist Maria Brink.
“Deceived” has Red Dragon Cartel at its best, making it one of the high points of the album. It is a rocking and catchy tune that flows with energy. The life in the song is hard to ignore, not the mention the amazing guitar action that runs throughout the album. “Deceived” is a song that works, while, on the other hand, “Shout It Out” is a song that does not.  It reminds me of 80s rock songs, but it left me thinking that I have heard it all before and lacked the life of the opener. Getting things back in the right direction is the hard hitting “Feeder.”
Next up is the show stealing “Fall from the Sky (Seagull).”  It is the type of song where everything comes together for a magical music moment.  It is the song that leaves an impression and the guitar just takes everything to the next level, rising above all other songs.  “Wasted” is another problematic song because I am not too hot on the gruff sounding vocals. It might grow on others after repeat listens, but not for me.  “Slave” keeps things fresh with its rip-roaring guitar work.  The vocal styling of Maria Brink makes “Big Mouth” worth at least one listen and definitely will have me checking out more of her work.  Heading toward the closure is The Black Sabbath-esque “War Machine” and the fiery, blues-rock “Redeem Me,” which is a pleasant surprise. The mellow “Exquisite Tenderness” is a beautiful song, but the piano track does sound out of place on this rock album.
In the end, I think this will be a divisive album for listeners with people coming away from it with a “love it” or “hate it” type of mentality.  I am sure that not everyone will like the many changes in vocalists and there are some misses on the album.  All in all, I think that Red Dragon Cartel’s debut is a case where the music is able to rise above its faults.  This is only their first album, so it will be interesting to see where they go from here.
3.5/5 Stars
Key Tracks: Deceived, Fall from the Sky (Seagull)”, Redeem Me