Alternative Rock Review: There Will Be Fireworks-The Dark, Dark Bright 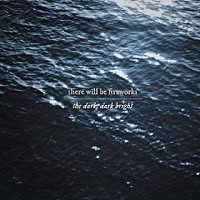 You’ll likely need to do some digging to find out more about Glasgow’s There Will Be Fireworks, but, based on their latest release it won’t be long before you know more about Nick McManus, Gibran Farrah, David Madden, and Adam Ketterer. The Scottish four-piece’s second full-length, The Dark, Dark Bright, is full of promise and influence, and leads one to believe that there are endless possibilities for this band going forward.
The first track I heard from There Will Be Fireworks was the extremely powerful track “River.” It’s a heavy and emotional song, but if you are looking for an album full of songs like it, you will likely be disappointed. You may want to look to the first single, “Youngblood” or “Here Is Where,” to get a better sense of what more of the album is like. While I don’t think there is a song better than “River” (it would be a tall order to top it), there are several good songs that fall into these indie rock ballad and folk/rock sounds.
As a Glaswegian band it’s easy to find influences for other current Scottish acts in There Will Be Fireworks sound. Frightened Rabbit is probably the biggest culprit, though Glasvegas can be heard as well. I was also reminded of Coldplay on “South Street” in its arena-ready pop/rock style. The more I listen to the album, the more I am reminded of Death Cab for Cutie in when I hear McManus’ emotional lyrics and the melodic style of these songs.

While “River” may be your first listen to There Will Be Fireworks, I find it necessary to give The Dark, Dark Brighta few listens. It is a beautiful album, full of emotion, and showcases the numerous avenues these young Scots are capable of. I would like to hear more of the power that was displayed on “River” and probably more focus from a band that shows so much range on their next release, but there is no doubt this album shows enormous potential. There Will Be Fireworks has all the tools to make an even better album then The Dark, Dark Bright, just a little more focus on their own sound would do the trick.
4/5 Stars
Key Tracks: River, Youngblood, Here Is Where, South Street
Kevin Kozel
April 18, 2014
Review Provided By Write A Music Review