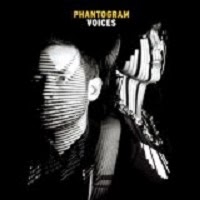 Anyone that has heard Phantogram’s “When I’m Small” must have known that this duo was poised for something bigger down the line. And if you aren’t familiar with it, you probably just don’t realize it yet. It was used in a razor ad recently and it seems to be on constantly. Now the Sarah Barthel and Josh Carter return with their second full-length Voices and look ready to become a household name.
Phantogram’s first album, Eyelid Movies, was pretty good. It was more of a trip-hop release. It had a few songs that were excellent amongst some good ones, but at times it fell into a bit of a lull.
Voices comes at you with a bigger sound, more hooks, and bigger beats. I think that it will still appeal to fans of the first album, but there is more energy and confidence in what Barthel and Carter offer up this go round. This is noticeable from the opening moments of “Nothing But Trouble.” This is followed by the strongest single on the album, “Black Out Days.” I found myself turning it up and bobbing my head early and throughout most of the album. Voicesis much more of an electronic pop/rock album then its predecessor. There are more melodies and guitar this go round, and it makes for an album that should be quite successful with a broader audience.
There are still a few moments more reminiscent of Eyelid Movies, generally those in which Carter provides the lead vocals. These songs do a nice job of breaking things up a bit, though I think most would still prefer Barthel’s vocals. I would like to see them both on more tracks in the future however. Carter’s voice is fine, but Barthel really becomes a star on this album.
Voices will be the album that breaks Phantogram. Several of its songs could be singles and I don’t doubt that we will be hearing many of them in commercials either. For a band that was already good, it’s rare that you hear them make such a large jump from one album to the next. The fact that they’re both quite good looking certainly won’t hurt their commercial appeal either. Be sure you check out Phantogram now, or be the one hearing about them from your friends later.
4.5/5 Stars
Key Tracks: Black Out Days, Fall In Love, Celebrating Nothing
Kevin Kozel
February 28, 2014
Review Provided By Write A Music Review