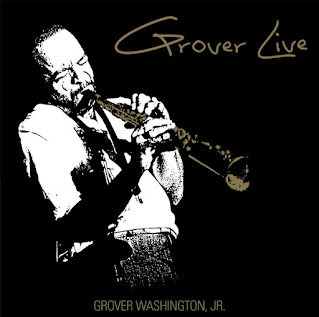 This release marks 20 years since the passing of the immensely popular artist who was largely responsible for creating a bridge between jazz and R&B.

Grover was well loved by his fans but also by the many musicians who worked with him over the years. He was a contemporary jazz artist whose music topped the “Smooth Jazz” charts, but his sound was funky, and his music was respected in all jazz and R&B circles.  His live performances and worldwide success prove that he was a timeless gem of an artist who entertained his audiences with a powerhouse band of some of the best players in the business.

This superb live recording – cut in June 1997 at the Paramount Center for the Arts in Peekskill, upstate New York – captures the essence of Grover’s greatness. With a coterie of ‘A’ class musicians in support, the legendary sax man’s work on this album demonstrates why he was not only a leader in his field but a pioneer capable of blending the subtleties of jazz with the funk and sweat of soul music.

In addition to Grover himself on tenor, soprano, alto, and baritone sax, the album features Donald Robinson on keyboards, Gerald Veasley on bass, Richard Lee Steacker on guitars, Steven Wolf on drums, and Pablo Batista on congas and percussion. It was produced by Grammy winner Jason Miles, and Executive Produced by Christine Washington, Jason Miles and Tim Ryan.

“We released a CD of these recordings in 2010, which has sold well for 10 years,” said Lightyear President Arnie Holland. “But when Grover’s family suggested we do a vinyl, we were thrilled to do it. The album was lovingly remastered for vinyl by Peter Humphreys at Masterwork, and lacquers cut by Joe Nino-Hernes at Sterling Sound.  The result sounds amazing and feels like you are at the show.”

The Double Vinyl with download card is in a gatefold jacket with satin coating and metallic gold highlights. The vinyl itself is 180 Grams audiophile quality and gold metallic opaque colored vinyl was utilized, to match the gold on the cover of the album.

The album will be released on November 27 to Record Store Day retailers on an exclusive basis for 90 days, after which it will be available generally.