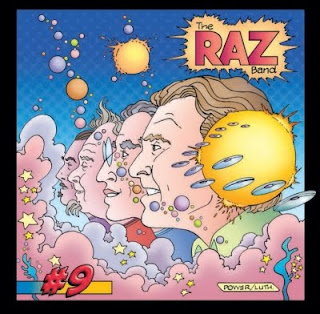 Los Angeles - For the last thirty-five years, The RAZ Band has been recording and performing their own brand of original songs, entertaining audiences across the US and globally.

This past December 2018 The RAZ Band recorded their first live album performing songs from the upcoming “#9” album as well as their most recent albums “Madison Park” (2015 Roadie Crew magazine album of the year) & “The Best of RAZ 1984-2015”. The live performance will be included as a bonus disc with the release of their new studio album “#9”.

As Michael Raz Rescigno states: “I'm excited that our first live album will be released with our new studio album. Our '#9' album was a great recording experience and was recorded, mixed and mastered in ten months from the end of 2017 through Sept 2018. We're also very excited that Joey Molland sings lead vocals on two of the songs on #9, one of which, 'Breadline Love' will be the first single off of #9. This is the first RAZ Band album featuring Joey singing lead vocals.”

Featuring tremendous production by band member Joey Molland, The RAZ Band is looking forward to sharing “#9” with the world.

“I Met Raz back in the late 70's. I've played with The Raz Band for about 40 years, whenever I've had the opportunity, and I've played here and there on all the The Raz Band albums. It was great this time to join them in LA for the rehearsals before going in the studio and doing the tracks. We took a short break and went back in to do the overdubs and it was during those sessions I started to get a feeling about actually mixing and producing the album. I talked with the guys and they were cool about it so off I went. I hope you like what happened.” - Joey Molland

In November of 2015 Gonzo Multimedia released The RAZ Band's award-winning album “Madison Park”. Madison Park won the 2015 Album of the year award by Roadie Crew magazine editor Airton Diniz. In May of 2016 Gonzo released “The Best of RAZ 1984-2015”; both albums received rave reviews around the world.

The RAZ Band has opened for Badfinger, Missing Persons, Berlin, Marky Ramone, Bill Ward, Iron Butterfly and others. In 2019 The RAZ Band will be performing in the United States as well as abroad. Tour dates are being booked.

Tracks:
Breadline Love | I Got This | Curveball | In The Meantime | Coming at You | The Winds of Time | Let Me Tell You | Call Me Raz | The Times Together | Nipple Town | Dirt