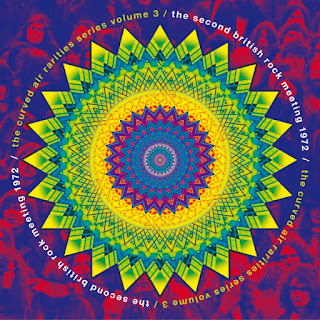 London - Legendary Prog band Curved Air is pleased to announce the third volume of its ongoing rarities series with The Second British Rock Meeting 1972 – OUT NOW!

The sound quality is of an astonishing fidelity for a live recording from the early 1970s and features the only known recordings of the band improvising!

The last track is an extended jam and a version of the band’s hit “Vivaldi” – lasting well over 30 minutes!

The band had just released its Phantasmagoria album at the time and the line-up was:
Sonja Kristina
Darryl Way
Francis Monkman
Florian Pilkington-Miksa
Mike Wedgwood

The booklet features a written introduction by Francis Monkman, who mastered the audio and curated the release personally, along with two essays written by attendees at the festival and previously unseen pictures.

Francis recalls the concert: “Listening to the recording, I was at first puzzled that we'd decided to start the set with Everdance, especially as I had some kind of hazy memory of waiting in the dank pre-dawn gloom, trying to persuade my fingers to work in preparation for our customary opening with It Happened Today. But the uncertainty of the initial holding pattern rhythm, together with Sonja's plaintive "what shall we do?" triggered the realisation that we had arrived on stage and plugged in, only to find that the guitar was for some now-long-forgotten reason not working. So we had to decide quickly once it became clear it wasn't going to be fixed in a hurry. And what you hear is the upshot...”

These recordings capture a unique set from the band’s heyday, their only recorded improvisations and all in unbelievable sound quality for a festival in the early 70s!