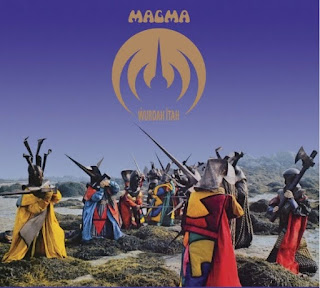 “Winter 1971. Between two series of concerts, we are pacing in circles like caged animals. Georgio Gomelsky senses the tension in the air and decides to book the little Chappell studio for us for a few days in order to release our pent-up energy. On 3 January 1972, Klaus Blasquiz, Jean-Pierre Lembert, René 'Stundëhr' Garber and I enter the studio. Despite the many imperfections of this recording, it remains an essential document to understand the origin of 'Wurdah Ïtah' and to feel our frenzy at the time.” - Christian Vander 1974

“Wurdah Ïtah” was recorded in April 1974, just one month before the sessions which produced “Kohntarkosz.” It forms the second movement of “Theusz Hamtaahk,” an epic work in three movements of which “Mekanik Destruktiw Kommandoh,” recorded a year earlier by Magma, forms the final part. Performed by the core players in Magma at that time - Christian Vander (piano, drums, vocals), Jannick Top (bass), Klaus Blasquiz (vocals, percussion) and Stella Vander (vocals) - “Wurdah Ïtah” is music stripped down to its bare essence. Although a total contrast to the splendour and orchestral power of “M.D.K.,” it nevertheless has just as great rhythmic power and surprising vocal lyricism, unquestionably marked by the claws of Magma! 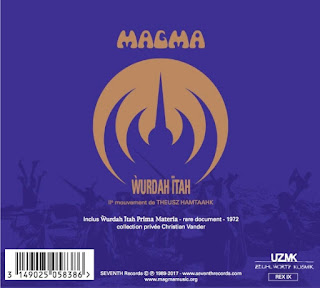