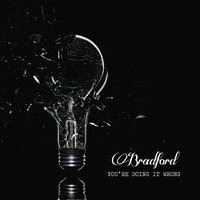 Bradford (Bradford Watson) released his second album titled You’re Doing It Wrong last summer. After listening I wish I had heard it when it came out! It’s never too late for great music, especially guitar based rock!

Brad is an Aerospace professional that got tired of the daily pressures of corporate America and decided to build his own studio. He is now a full-fledged indie musician, the total opposite of his day job. Now he has a great release valve at the end of each workday to go home to. I totally get that situation believe me.

Brad wanted to make an album that sang without the singing. That is the most wonderful thing about instrumental music, it does just that if it is good enough. I am here to tell you that this music passed my tests. I am picky and very particular when it comes to my music and there is high bar set prior to any listening experience.

If you like to rock, then you have some favorite guitar heroes, right? Let me put it like this, if you like Vai or Satriani you will love this Bradford album. As I was cruising along in music heaven, track six kicked in. ‘Flux” is a beast! The way it begins and builds to some of the heaviest Metallica (and ironically he looks like James Hetfield!) like riffs and proceeds to blow you away with nothing but volume and muscle. I loved it, period. Then like flipping a switch, the scenery travels miles away from the head banging fun. Suddenly the short outing of “Mom’s Place” comes on with its twangy notes. Short and sweet, the acoustic and electric guitar paints a different kind of picture that makes you feel like another person stepped in to take over the strings. Then the juggernaut starts all over again, kicking it into another six-string dimension with “Run Away.”

From that point it never stops, there is no rest for the wicked. The music continues to roll along with unrelenting straight ahead rock albeit some different flavors and angles to keep it interesting.

You’re Doing It Wrong was two years in the making. Now keep in mind full time musicians take that long to create an album, this man did it while working a full-time job. This is a strong musical statement and Brad should be encouraged to carry on and explore his many talents.

He did it all himself which is a wonder but very possible with today’s technologies. The caveat here is you better know what you’re doing and have the chops to back it up. I can attest to the fact what a difficult process it is making an album, especially on your own, as I served as an Associate Producer for an artist that did something similar. Bradford proves that he is major league guitar player.

I don’t know who is doing it wrong here, certainly not Bradford! This is a killer instrumental rock album and I highly recommend checking out the guitar that has its own distinctive voice ala any vocals to help it along. This ride is owned and operated by Brad Wilson and one destination you will feel compelled to arrive at more than once, trust me.