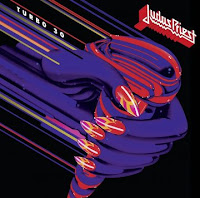 This month the metal gods, Judas Priest, returned with a reminder of where the band was in 1986.  Turbo 30 is celebrated on their 30th anniversary with a 3 CD set. The set includes a trifold cardboard fold out case containing the original album remastered and two live discs recorded in Kansas City on The Fuel of Life Tour.

I must admit this is not one of favorite JP albums but it does not lack for classic heavy metal tracks that have become staples of their live set. I have seen them 3 times now, first during the comeback tour with Halford back in 2005 promoting Angel of Retribution, then in 2010 to celebrate the great British Steel album and finally in 2014 to promote their surprisingly different and excellent Redeemer of Souls album. So, I got a taste of several different decades in live setting and have had a good dose of this band over the years and completely enjoyed it.

The title track is killer, what a grand opening for an album. Another heavy track followed it titled “Locked In.”  “Out in the Cold” was another stand out giving their rabid fans a taste of the heavy metal priest they came to know and love. “Parental Guidance” sounded more like a Twisted Sister or Quiet Riot anthem than anything from their catalog even although there were some good guitar licks.

One thing that may have got lost in translation was the fact that it was 1986, and this was a band trying to create a sound to fit the times. The problem with a heavy metal band with the reputation of JP is that they would only set their audience up for some disappointments with Turbo.  With the addition of synthesized guitars (which they would master brilliantly on the Nostradamus album many years later) and that techno sound it would water down the mix and take away some of their normal oomph and power.

This is not to say that this album was not worthy of special anniversary issue. People listen differently with the passing of time and we cannot take for granted what a great band of talented musicians this band had at its disposal. And their lead singer Rob Halford did not look like the badass that he does now. Ever since his return to the group, with lightning bolt tattoos on his shaved head and that menacing goatee - well let’s just say it has been quite a ride. They all look metal that is for sure.

If you have a thing for this kind of release you are in luck plus you get a ton of prime JP music live which is always a good thing if you are a fan and have seen them live you will appreciate it even more. They get an A for effort on this back in 1986 and overall C+ with the addition of the live cuts. They should have stood their ground and stayed with the time-tested formula of heavy metal without all the glitter and things around the fringes. This is great for the collector and completest but for the die hard metal freaks, it’s a maybe or total pass.