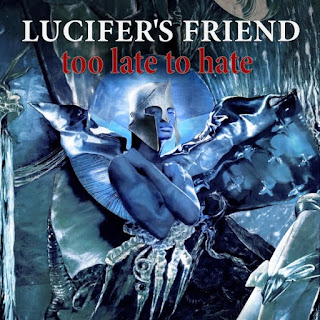 London, UK - Much to the excitement of music fans worldwide, rock legends Lucifer's Friend have released their new studio album titled “Too Late To Hate”! This is the band's first true NEW STUDIO ALBUM since 1981!

Lucifer's Friend reformed in 2015 and since then has been playing high profile festival concerts such as the HEADLINE act on 4 Sound Stage the SWEDEN ROCK FESTIVAL and at the ROCK OF AGES and LORELEY festivals too. The band features core original members John Lawton (ex-URIAH HEEP), Peter Hesslein and Dieter Horns along with long term members Jogi Wichmann and Stephan Eggert.

“ 'Too Late To Hate'....the new studio album, was recorded off the back of our 'comeback' performance at the Sweden Rock Festival. The impetus we gained after recording 4 new studio tracks for the 'Awakening' album was what we needed. Plus the feedback from the 'Live At Sweden Rock Festival' CD, brought about a feeling that we could take on some 'unfinished business'... Lucifer's Friend has been over the years, mostly encamped in the studio recording material that has stood the test of time... However the new studio album 'Too Late To Hate' with 12 original tracks is a sign that we are still very capable of producing good material and bringing it live on stage.” - John Lawton.

Lucifer's Friend formed in 1970 with their influential and groundbreaking self-titled album, famous among connoisseurs of 70's hard rock. Its heavy and majestic overtones made it a pioneer release in rock music.

The group went on to release six albums in that decade. In 1976 Lucifer's Friend suffered a hard blow when British vocalist John Lawton joined Uriah Heep. The band broke up in 1982 and briefly reformed in 1994 as Lucifer's Friend 2 for the album “Sumo Grip”. Now Lucifer's Friend is back, after 30 years with their highly anticipated new album “Too Late To Hate”!