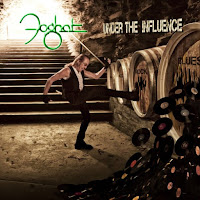 Foghat is one of those bands that I have a history with. I feel a lot of excitement and anticipation when they are getting ready to release some new material. I go back to the early days of the 70s when I discovered them in Don Kirschner’s Rock Concert. I distinctly remember Lonesome Dave singing “Honey Hush.”

The first time I heard Under The Influence I was immediately impressed with their spot on combination of traditional blues combined with hard driving rock. There are many examples of that process they have down so well on this album.

The lead off and title track kicks the door open (or should I say kegs filled with vinyl) in a way only Foghat can. Working in their fifth decade of making great music, Foghat still has the engines running full steam ahead and the midnight oil burning.

“Ghost” is the first real killer track after the boys tear it up on the first two tracks and warm up your seat. One of the trademarks of this band is the slide guitar and this one track cements that expertise and fiery sound. The combination of blues and rock, the thumping bass and drums and stinging lead lines and their blistering guitars sound like a blazing fire of music. Bryan Bassett and special guests like Scott Holt and Kim Simmonds make for a real blues rock festival!

“Upside of Lonely” carries with it the irony and comedy that the blues can deliver. Besides having a foot stompin’ riff to push along the perfected made for the blues vocals of Scott Holt, it’s a real cooker and one of my favorites because it made me smile and kept the mood rocking.

When it comes to catchy riffs I think “Heart Gone Cold” hits the bullseye. This is a get down and get funky rocker with all the lyrics to boot. Foghat does not get any better than this track it’s as simple as that. All of their best is rolled into this one track. To put the icing on the cake and close out the show, they perform an updated version of their classic and most famous track “Slow Ride.” I think it was a good idea as this particular lineup has been together long enough to justify rebooting some of the more famous music. If you want to get an idea of what this band sounds like live, this jam will give you some perspective, yes indeed they can still kick some ass!

If you want to get your motor running and restore your faith in the church of rock ‘n’ roll and a some of its best known disciples (or should I say rock ‘n’ roll outlaws), then check out this excellent studio recording by Foghat titled Under The Influence. This is a very strong effort that is consistent from start to finish. There are no surprises and you get what you came for with this band, straight ahead blues rock with an attitude. There is complete understanding of what the “influence” is and that is a good thing in this case.

Smile Lonesome Dave wherever you are, I think Roger Earl and his mates have preserved the Foghat sound and kicked it up another notch on this one.

Tracks:
01. Under the Influence
02. Knock it Off
03. Ghost
04. She's Got a Ring in His Nose
05. Upside of Lonely
06. Heard it Through the Grapevine
07. Made Up My Mind
08. Hot Mama
09. Heart Gone Cold
10. Honey Do List
11. All Because of You
12. Slow Ride
Keith “MuzikMan” Hannaleck
October 12, 2016
Founder of:
MuzikMan Productions
MuzikMan Reviews
Write A Music Review
Prog Rock Music Talk
New Age Music Reviews
Rate The Tracks