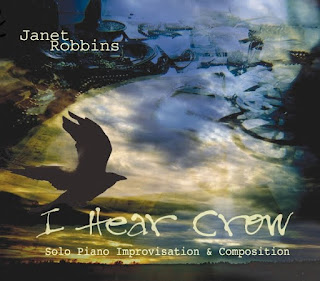 In these nursery rhymes and fairy tales, you fly the cockeyed route of a silly tool! Crafty forager stealing seeds from my garden, you appear. You crack me up! The way you teeter and tot, pop!

Will you sing now too? I hear it’s often in your solitude your notes ring. Why, do you follow me? I’ve got no bread. And you make such noise that rattles my head!

But your magick is strong—your unexpected genius.

Amuse me! Bemuse me! For soon I shall attend the busyness of the world. I must, I must attend! But I hear Crow…

Asheville, NC - Weaving compositions of magic, mysticism and beauty on solo piano, Janet Robbins has released her sixth album “I Hear Crow”. Much like Debussy’s work over a century ago, “I Hear Crow” inhabits a twilight world of improvisation and composition. Described as “moody, laconic, enticing, sometimes baffling”, Janet’s music possesses a “dark beauty and symphonic grandeur.” Repeated listening rewards us with a trove of subtle jewels, like baubles left on a windowsill by a half-tamed crow. Whether in its solo piano pieces or those where piano mixes with ambient textures and orchestrations, there is great beauty to be found in the simplicity here.

“I Hear Crow” recalls the effortless ease of Harold Budd's piano combined with Hector Zazou's poignant textural arrangements, or some of Ryuichi Sakamoto's more ambient piano-based explorations. Wisps of Keith Jarrett and Joni Mitchell add a note of nostalgia to the emotional mixture. With nomadic roots and a celestial longing, her compositions are as equally influenced by the experiences of ancient sacred sites in Turkey, England, and Egypt, as the mysterious Catskills of NY, 'land of the sky'–Asheville NC, and majestic redwoods of Northern CA.

“Janet Robbins new CD 'Song of the Gypsy Tree' is a fresh interpretation of musical art. Her lyrics are profound, her voice is pure, and the music is deep and emotional...” - Steve DellaVecchia, Producer/Composer

“The sense of being carried along on an unfolding trip into beguiling soundscapes of a highly personal nature is constant; beautiful at times, deeply introspective at others, then full of shadow, then vivid hues and warmth.” - Morpheus Music Reviews

“ 'Song of the Gypsy Tree' is a truly unique and amazing experience! I don't recall ever hearing such a well-crafted blend of lyric, melody, voice and sonic imagination...What a beautiful, enchanting and musical album, filled with pleasant surprise after surprise.” - Chuck Wild, Producer

Born into a musical family in Nashville, TN, at five Janet began playing/studying classical piano. After years of writing and performing, she eventually made her way to Los Angeles, playing in bands before finding her compositional voice through the creation of atmospheric soundscapes, incorporating her vocal and instrumental talents as well as the diverse cultural influences she has absorbed from her world travels.

And now in 2016, Janet Robbins new album promises to take the listener on a spiritual musical journey through vast aural landscapes. Janet explains. “Sonically I still draw from a source of tone and musicality, that seems to reside in both middle earth and deep space. There is a stillness and intimacy in this music but the quality of journey still exists there.”

In closing Janet has this to impart, “I think we have the gift of almost unlimited creation and a responsibility for what/the world we create. So cook a great meal and share it with friends! Sing a little tune to someone on the street, turn a moment into a radical departure from social dictates, use your voice and break the numbing acquiescence of a collective sleep. Love life and share love.”

Janet Robbins is like a musical spirit guide – follow her and she will lead you on an enriching and captivating journey!

Janet Robbins' videos
“What Do They Hear”: