Huey Lewis and the News With Jamie Kent At Tanglewood
Lenox, Mass.
June 28, 2015 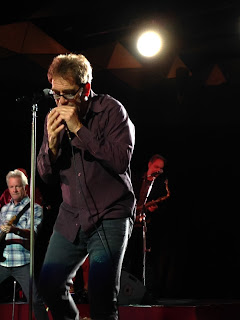 The unseasonable weather did not stop people from filling the grounds at Tanglewood in Lenox Massachusetts on a Sunday afternoon when Huey Lewis and his band arrived.

But before the main act hit the stage a local native named Jamie Kent entertained us. Living in Nashville now, Kent grew up in Northampton Mass. He was thrilled to be on stage and he and his partner Reese Williams performed a fine opening set. Williams played a standup bass with energy and style while Kent strummed his guitar and belted out songs like his was born to be there entertaining us all.

After Kent did his set he left the stage and we took a walk for the break. We saw he was walking around and stopped to speak to him, which many others did as well. He invited us to the merch tent to pick up his CD Embers & Ashes. He was very kind and signed the CD as well as many others for folks that were patiently waiting for him there. Along the way to the tent he told me that he got his website URL www.jamiekent.com when was in seventh grade. He must have known he would be using it at some point.

Jamie Kent is a very talented singer/songwriter that is gracious and humble. I can understand why everyone loves him and wants to be around him. If you want to catch him live go to the Northampton Summer Concert Series (Old Courthouse Lawn) on July 17th to get a taste of his folk, Americana rock music. He is currently working on his new album in Nashville. 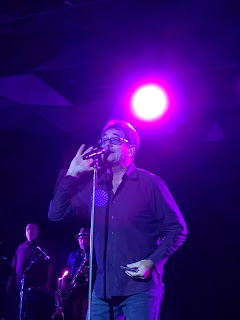 I had never had the opportunity to see Huey Lewis live before but I certainly remember how he was pumping out all the hits back in the 80s when I was actually living in the Bay Area from whence he came. He was one of many artists that took advantage of the popular MTV to help make his music reach a worldwide audience via videos. Today of course he is a household name. The current tour is titled While We Were Young, after the new song they recorded. They did play the song and everyone loved it.

Huey sounds as good as ever and his band is so tight! The brass section really adds a touch of class to everything and gives the music another layer that helps to drive home each song with more impact.

Huey and his band are rooted in the blues and they know how to lay down a number with emotion and endless energy. They kicked off the proceedings with “The Heart of Rock & Roll” one of their big hits from the early days. After that the crowd was under his spell as Huey and his band rolled out the hits, a few acapella numbers as well as some tasty covers like “Um, Um, Um, Um, Um, Um, Um” and “But It's Alright.”

After about an hour it was time to say goodbye but we knew it wasn’t over yet, after about 5 minutes of applauding, whistling, hooting and hollering they came back out on stage and gave us four more great songs to complete the set.

Huey assured us he would return to Lenox so I hope to see him back next year; I would not hesitate to go again. 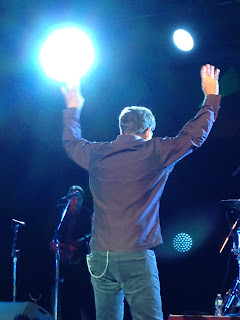 Set List:
The Heart of Rock & Roll
If This Is It
I Want A New Drug
He Don't Know
The Rhythm Ranch
Back in Time
Um, Um, Um, Um, Um, Um, Um
(Major Lance cover)
Little Bitty Pretty One
(Bobby Day cover)
While We're Young
Heart and Soul
(Exile cover)
But It's Alright
(J.J. Jackson cover)
We're Not Here for a Long Time (We're Here for a Good Time)
Encore:
The Power of Love
Do You Believe in Love
(Supercharge cover)
Bad Is Bad
Workin' for a Livin'
Posted by Keith "MuzikMan" Hannaleck at 6/29/2015