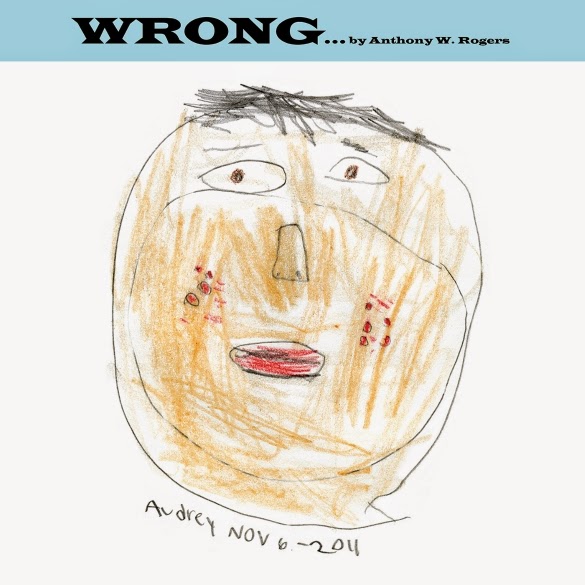 A stylistically diverse and decidedly homemade effort, Rogers recorded WRONG alone at his home in rural West Virginia from 2011-2014 through a multi-track recording layering all the instrumental parts and vocals.

Says Rogers, “It's a process I'm used to from the old days and it fits the schedule of my life. On this recording, the cheap equipment I used and the way I used it, is really primitive by 2014 standards. I enjoy it that way. I get a certain perverse kick out of achieving sounds and sonics cheaply.”

Anthony Rogers is a long retired veteran of the local tri-state music scene in many rock and jazz bands in his youth. Rogers continued to blaze his trail through the Washington DC area writing recording and performing original music with local favorites The Now and Ten Below-a band which originated in Frostburg. Besides playing on several recordings while in DC, Tony also performed as drummer on several occasions behind legendary DC vocalist and Grammy winner Eva Cassidy and in several other jazz combos.

WRONG was prepared for release with Chris Biondo (Cassidy's musical collaborator) at his facility in Kensington Md. Rogers also recorded with Biondo as engineer on Rogers' 1994 solo debut 'Identifiction'.

Tony relates that, “I did most all of the mixes at home except for 'Keep Holdin On’'which we re-did at Chris'. On the way in, I walked past his multiple Emmy awards he won for his TV music (Nat Geo, TLC, etc). He has the best ears and intuition of anyone I've been lucky enough to be around. He knows what I'm going for. I trust him and his opinion completely.”

Although there are no plans presently to return to live performance at this time, this album signals a return to recording activity. “I'm better off to use what very little time I have recording creating and writing. I have a full life outside of this.  It takes a lot of sustained focus,” says Tony.

Those lucky enough to hear the dizzying and stylistic effort seem to favor the harmony laden wistful look-back track, “White Beach” (about Rogers' home town); the closer - “Johnny/Janie” a 1950's influenced let's runaway theme sung masterfully by his then nine year old children Audrey and Joe Rogers (“People really seem to like this one. It’s easy to understand”); to the more adult themed guitar feedback drenched tribute to his tragically deceased childhood friend Mitch Sanders, “Crunch” (“It's kind of a twisted blues song for a twisted situation”); and finally, the centerpiece mystical acoustic quasi-prog penultimate track…”Wash” (“the main lyrical gist of the whole record, really”).

As to the influence of Smile, Brian Wilson and the Beach Boys, Tony says that "there is no question that the vocal arrangements that Brian did in his heyday are so firmly imprinted on my mind from my youth, it is an integral part of me and my own sound. I bought all the Beach Boys bootlegs, tape trading, past masters stuff since the 70s-Smile is a pillar of modern musical achievement. Brian would be prominent on MY own personal musical Mount Rushmore."

Says Rogers, “This was designed to be an LP. A two-sided, two-part, two-gals record album. The vinyl package is beautiful. This was made for vinyl people. Top notch 180 gram heavy vinyl, great color artwork, inner sleeve, and lyric insert. The idea is to get out your headphones, play side one, then take a break and then do side two. Like two separate EPs. No CDs this time (like 'Identifiction'). With downloads, Ipods, phones, even CDRs, you can make your own.”

WRONG is certainly one of a kind… and you can get copy in most cool independent stores in the mid Atlantic/Pennsylvania area and the great Solar Mountain Records in Keyser,WV.
WRONG  is also available through the standard download sources (iTunes, CDBaby, Amazon). WRONG is the first release on the Wildflow Unlimited record label which seeks to feature and promote artists on vinyl.

To listen to tracks from WRONG:
https://soundcloud.com/anthony-w-rogers