Rock Review: Age of Aquarius-Out There 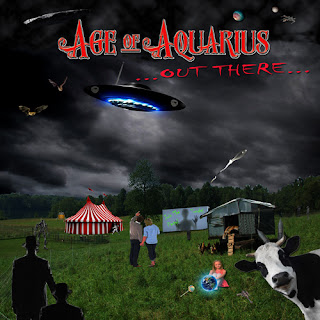 After their seismic debut Dawn of the Age of Aquarius, the band of the same title – Age of Aquarius is back, this time, with an intergalactic sound. Out There, unveils a unique outer space saga that brings about everyday questions of what more could lie beyond this world. What really might lie….out there in the great beyond? The band’s addition of Nakoma Z gives the album an elegant tonality to the record and touches of pop to the progressive-rock base and foundation of the album.

“Anyone out There” starts off the record by playing into the overall theme of extraterrestrial life but, at the same time asks a more direct question pertaining to her own life. Feeling alone, she craves companionship and repeats the question throughout the song, longing for completion. On the intro of “Face of the Unknown,” there is a tinge of bluegrass/country that quickly graduates into a song of pure rock of this image or creature we cannot quite make out but, we are so curious to find and identify. This alludes itself more to the serious note of worldly wonders.

“Mysterious Light Being” is almost like a part 2 to track two. A duet that is a double entendre of sorts, where both individuals are curious of this light being. Yet, the male counterpart  - Peter Cox, could also identify as the mystery being himself. It’s a beautiful expression of longing and attempting to make the best out of the unknown and the longing to know for certain what is real and what is imaginative.

Asking the longing, never-ending questions, “Alone In the Universe” is a more serious-mannered song, tending to the nature of human beings versus other walks of life… or if there should be any at all. The echoed quality of the production, along with the deeper male voice offers a more reflective view of the song’s message. It also goes a little deeper, turning the tables back on our own human ways – asking “What if”?... of a utopian way of life. The effectiveness of this piece has much to do with the melancholy nature of the ballad.

“Fifth Dimension” acts as the bridge of the album in many ways. Not only is it a strict instrumental piece, it too does not vary much in the structure of the song. Although, the song does have a slight roller-coaster feel to it. as the beginning starts slow with a piano note and fading sound, it builds gradually to a guitar solo that plays throughout. Meanwhile, “Non Carbon Life Form” is a blend of keyboard synthesizer and brief spoken-word curiosity of the appearance of a certain specimen, as the guitar glides on through.

“The Men in Black” shifts back to Nakoma Z. She eerily sings of how someone stumbles across what they are not supposed to know. Now, ‘the men in black’ must take care of the individual if he or she should speak a word of what they’ve seen. But, the light piano along the track is slightly misleading distracting from the tone of how she is ordering the person to be assured not to speak or risk serious consequences of the ‘men in black’.

“Atomic Eight” is a twist in the album that still alludes to the spacetime theme of the record, with ever-so-slight feedback vocals, but, there is a harmonious blend too between the progressive-rock sound of the guitar and a jazz-like feel to the track as well. It is a soothing instrumental piece that calms the listener’s mind. “First Contact” is based on the amazing energy of the ‘first contact’ with a supposed alien and then that said ‘alien’ starts explaining the reasons behind her extreme exhilaration of those feelings. All this while the start and finish of the song’s sound, sounds much like a slot machine reel at each end of this rock n’ roll record.

The finale piece, “We Come in Peace,” is probably the most tongue-in-cheek and contradicting piece of the album. “We come in peace. We come to rule your world. Just get down on your knees.” So goes the line in the song, so is the assumption of what a higher intelligent life form might practice on us, should that kind of day ever rear its disturbing head. But, it also does speak to the ease, willingness, and gullibility of many persons in the modern world as well. We are often so easily influenced and convinced of what we are read, told, and ‘suggested’ to do at times; that it could very well be speaking to us in a contemporary light.

Out There offers a combination of action-packed, comic book imagery, along with surprise hints of pop-up styles inside the effects of progressive-rock. “Atomic Eight’s” sparks of jazz horns act almost a reprieve from the interstellar adventure the listener is sent on. “The Men in Black” meanwhile offer a theatrical pop perspective with notes of singer-songwriter/Americana vibes.

Key tracks: “Anyone out There,” “Fifth Dimension,” “Atomic Eight,” “The Men in Black.”