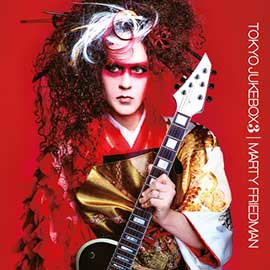 Hot off the presses of his latest installment, now a trilogy of his Tokyo Jukebox collection, Marty Freidman kicks it into high gear with Tokyo Jukebox 3. The album is Friedman’s take on many J-Pop hits that burst at the seams with his guitar shredding skills emboldening with his traditional techniques. Marty even went as far as to go all-out traditional stylings for the album artwork. Dressed in a kimono and kabuki make-up, the guitarist finds himself exploring every possible facet of Japanese culture in the making and styling of this record.

Now to the music. As the lead guitarist for one of rock and metal’s most notable and revolutionary band, Megadeath, Marty Friedman contributed to much of the success of the group at the height of their career for 10 years; until eventually leaving the band in 2000. To this day, Friedman resides in Tokyo, Japan where he has become a household name, and dabbled in Japanese government affairs, all while maintaining several album releases and touring multiple times since his move overseas.

Tokyo Jukebox 3 stands alone from traditional heavy metal music. Oftentimes, at least from my experience, thrash-metal/speed-metal bands and their albums tend to have a feature of identical sound where, if there is no lengthy pause between tracks, it remains unknown to the listener that a new song has begun. Friedman, being the aficionado that he is with his guitar, combines his skill and precision of thrash-metal with J-Pop melodies to create something truly unique. His capability not only to make every track sound different and leave a little wonder in each track is stunning.

“Makenaide” starts mainly as traditional Friedman’s work would show, with a consistent powerhouse guitar playing just with some J-Pop melody thrown in. On “Senbonzakura,” you get your first dose of change-ups and nuances. As the song plays, it feels like a crescendo with a sudden brief lull, only to pick right back up again and burst around the four-minute mark. The short and mystifying release of a lighter guitar-playing shocks the listener to engage in amazement. “Gurenge” while not a personal stand-out track, plays well to keep the listener’s interest and sensation going, especially as Freidman goes full-on beast-mode throughout.

“Kaze Ga Fuiteiru” sounds like a combination of a sing-song poem, rock concert, and cartoon series theme song all blended into one. Marty told of one of one of his near and dear friend’s opinions of the track, calling it…rightly, ‘grand and elegant.’ It’s almost as if the piece is written into three different stages. “Echo” is a breakaway from the chaotic thrashing in the beginning, with an intriguing static radio-play. As it plays through, it’s a cool back-and-forth between traditional thrashing and easier mellow strumming; once again, built back up to powerful chords to end out the song.

“The Perfect World, featuring Alfakyun” is the only vocal track but very captivating in dreaming of one day finding the perfection they are longing for. It’s a piece that could strike at the heart of any listener not only for the purpose of love but, perfection overall; particularly in the times that we had been facing this past year with the pandemic. “U.S.A.,” rightly titled, is an epic story-teller piece that hits every high note imaginable along with the 4-minute tune while engaging the listener for more.

“Shukumei” pairs well with “Gurenge” while it offers quite a few different opportunities for more somber or dramatic moments. “Shukumei” has several different tones to it whereas, “Gurenge” is more neutral sounding. ”Ikuze Kaitou-Shoujo” is possibly the heaviest-loaded track on the album. Not only would it appeal to the J-Pop fan base and thrash-metal crew alike, but it strikes a chord with the heaviest of rockers and metal-enthusiasts too.

Things begin winding down on “Sazanka,” or at least as the song begins. It has a little aggressiveness to its sound but, not nearly what the rest of the album entails. It is a very soothing record on the album with the keyboard as its supporter to the guitar match-up. “Time Goes By” keeps with the more steady and mellowed tonality. However, it seems to be more somber with points of crescendos and climaxes to build up intensity and excitement for the track. All the while, the ending becomes a surprise fade-out which separates the song from the rest of the record. The last song, “Japan Heritage Official Theme Song,” is a lighter, airy, and free-sounding lead-out track. The strings to this record give it a balanced and unique twist that actually compliments the rest of the record quite nicely.

Tokyo Jukebox 3 is one of those records where initially you may not think there is a spot in YOUR ear for this album, yet there is truly something for a wide variety of listeners. Marty Freidman remains on top of his game when completing this trio of ‘jukebox’ jams.