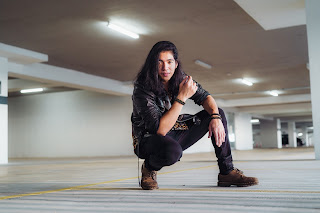 Maha Jeffery started off as a bedroom musician at the young age of 17… fast forward to the present day and he’s known for his electrifying showmanship coupled with powerful vocals. Cementing himself as the most distinguishable voice in the Malaysian music scene, Maha’s new offering ‘Daisy’ certainly lives up to expectations. Bringing you up to speed, Maha spent his multi-instrumental days sessioning for various acts in Malaysia but stepped into the spotlight on his own when he released his first single ‘Sleep’. He then fronted hard-hitting rock band, TMJB, playing venues all around South East Asia, and events for high profile multinational companies and celebrities. Maha is currently based in Camden, London.

He released his 2018 EP 'Changes' while living in Oxford, UK and coupled it with a mini tour around London, Manchester, Amsterdam and Oxford .Upon returning to Malaysia, he spent 2 years focusing on TMJB before Covid hit and they disbanded. He spent a year learning how to produce his own music and returned with his first solo release in 2 years with 'Watermelon Juice'. In 2021, he has released 4 singles so far, all culminating towards his first full length album, C.A.I.S.O (Con Artist Intergalactic Space Opera) to be released in 2022.

Speaking about the enchanting new release ‘Daisy’, Maha had this to say, “Daisy is about finding solace in grief. It's about seeking comfort in the loss of a loved one through the memories you had with them. I wrote this song for my girlfriend whose grandfather had recently passed at the time. It was never intended to be for me. It wasn't until my own grandfather passed when I realised that maybe it was meant for me as well.”

Armed with an uplifting, nostalgic approach, the track feels like you’ve gone through the five stages of grief and are now in the acceptance phase. Entirely reassuring and relatable, this could be in the running for rock record of the year. Adding to how the track was created, Maha shares, “My girlfriend asked me to write a song for her about grief to help her cope with her loss. I always write my songs acoustically first because I am in the firm belief that if a song sounds good stripped down, it's a good song.

I remember when I first played it to her and she loved it. This was also around the time I was learning how to produce my own music so once I had it done, I started building the full form on Ableton, so with drums, bass, electric guitar, strings etc. Once I was happy with the demo, I shot it over to my producer so we could work on fully fleshing it out. What really made it for me was my girlfriend's reaction when I finally let her listen to the final master.