Label:  Get It! Records, LLC 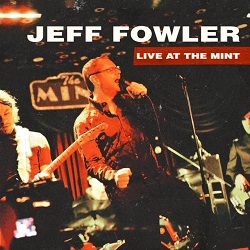 Any artist that has success has a solid core group behind them. Rick Wakeman said when he met David Bowie, the best advice he could have given him was that you get musicians that believe in what you are doing. I think in the case of Jeff he was able to do that on Live At The Mint.

The voice and music need to mesh and have excellent production values to be fully realized when recorded then released to the public. Ok so another box is ticked, the production is very good and and nice and clear.

Jeff has a very smooth delivery, perfect for covering pop-rock tunes of his own and some covers with a tasty encore medley with many fan favorites. His vocal approach is very comforting and it suits the tracks he performs.

Tracks like “Firefly” provide a good example of that particular sound. Think of the soft touch of a Christopher Cross at his peak or hints of Sinatra in his delivery. Frank was one of the greatest and his range was limited, he did not belt out a song, he was smooth and purposeful. That is how I would look at the way he makes a song come alive on stage. Even when he raises the bar towards the end of “Goldfish Girl” he gets to a certain point, lets it go, then moves to the next phrasing.

The audience interaction is always a key component in any live performance and then if it’s recorded to be released as a live album, even more so. You can tell without being there that Jeff has the attention of his audience and is really enjoying mixing it up with them.

I have to hand it to the supporting band with the way the music is behind Jeff when he sang, it did not drown him out nor did he have to compete with an instrument hitting the needle in the red on VU meter. That is very important for the singer and obviously the person running the mixing board for sound had their act together.

When “True” started it brought back memories of the 80s. What a great tune that is and album. Spandau Ballet was a unique name for a band. I remember I had that album on cassette. The background vocals on this were excellent by Sharon Youngblood. It is was very well done and the musicianship was spot on. So, kudos for covering a classic track with proper representation. It makes me wonder now what it would sound like on vinyl. It takes some wherewithal to cover Paul Simon’s “50 Ways to Leave Your Lover.” I was surprised how well it was done.

My favorite track was “So Far,” the only rocker on the entire set. With such a fully capable band I think it would make sense to do more tracks like that. Just my thoughts and opinion of course.

Live At The Mint was team effort and that is why I felt it necessary to list all the contributors. Jeff Fowler is the not kind of artist that is going to rock the house but if you are in the mood for an evening of fun and some easy listening with pop and rock elements you will enjoy his music.

On a side note…Jeff since you are a lawyer how about doing a parody on a fictional court case with members of the circus as your jury and you sing your defense case to them? If anything, it would make a very entertaining video!