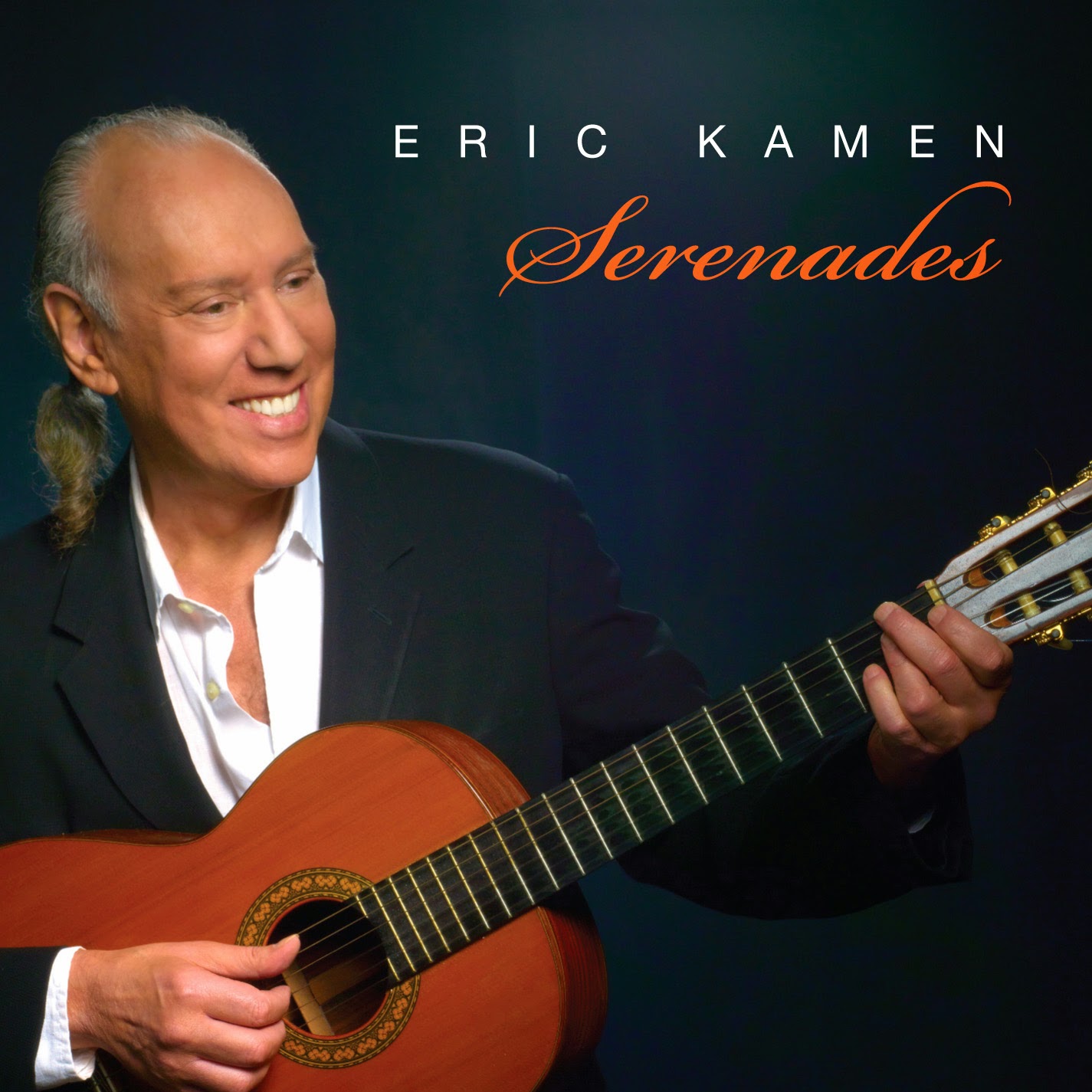 It has been since the 2008 The New Art of Urban Flamenco release since we had the pleasure of hearing Eric Kamen. Yes that is long stretch between albums but it happens in this music business especially when you go to work every day like everyone else to survive. God knows it has become nearly impossible to make a living these days unless you are part of the 2% that make the millions. You know the artists that you hear 10 times a day all day with the same hit singles on the radio?...those millionaires. Eric Kamen is so far removed from that it’s like he is in a different universe and I am sincerely thankful for that. This man actually has natural talent, there is no help from anyone to fix his mistakes or cover them up with fluff. He is the ultimate indie D.I.Y. artist. What you get is all Eric and it is musical perfection…a literal musical bliss for the mind, body and spirit.

So now we have a new album titled Serenades to help us say goodbye to the summer and usher in the fall. The autumn is so inviting with all its crisp cool days and the splendor of the trees changing color then shedding their leaves once again. This is comparable to what Kamen does on this new release. He takes a different direction and puts more focus on guitar led journeys that have some real prolific bass lines. He plays a certain brand of world flamenco instrumental music peppered with the R & B beats from the city streets that gives it all such a unique crossover flavor, well just find it irresistible.

“Red Moon” is an example of how you cannot underestimate the power of the acoustic guitar and well placed bass lines. It is as picturesque as a sunset in Singapore as it rests on the horizon, gleaming off the water, putting all the junk boats to bed once more. If you have witnessed that it’s amazing, breathtaking and unforgettable. The music is as powerful and mighty as an oak tree in all its glory on a warm summer day and then in same breath as gentle as a breeze coming off the ocean waves as you let your feet sink into the hot sand. This is the kind of music that can only find a path through the ears into your mind’s eye to create these scenarios.

This time around Kamen relied less on the beats and sounds generated through that level of recording and he let his guitar do the talking from start to finish. There are many other sounds but they complement his guitar rather than pull you away from it. His past work is superb but this is a departure from the last outing and it brings the finite sound of the acoustic guitar to the fore in all instances. The beats and various sounds come in to accentuate the unique offerings in each track. The way the album kicks off with “The Lost Tribe” makes it a perfect choice to set the mood and atmosphere going forward. “La Cubana” is effortless in its tempo and it invites you to another land far away, as Kamen’s music always magically does. Now what I found interesting was “Tribute to Jimi.” It is a great track but the last person I would have thought of was Hendrix while listening. However if you listen to this music you realize that you cannot compare it to rock although at times I hear elements of surf rock turned upside down and sideways to make it all new and more interesting. Any good guitar playing is a tribute to Jimi as far as I am concerned. The man changed the world with his short stay here, his influence stretches across the cosmos, and it will continue to do so.

“The Blue Grotto” is a superb rendering of rapid fire guitar lines that seem like they are flying off Kamen’s fingers so fast that you would see sparks. The beats and drums form the backdrop that gives it that “worldly faraway place vibe” that Kamen has down cold. It all comes together and says hello in a big way.

Eric Kamen is an artist extraordinaire and his flair for taking his multi-colored paint brush that we call the guitar and creating a masterpiece is a gift from god. I am very glad he has decided to share his art. I hope the wait is not so long for the next installment of this audible magic.

Review Provided By Write A Music
Posted by Keith "MuzikMan" Hannaleck at 9/01/2014 No comments: