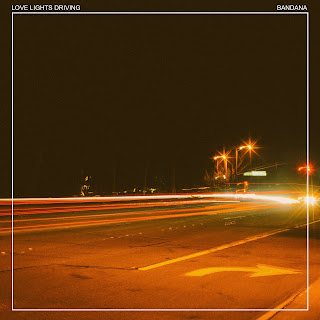 Los Angeles based outfit LOVE LIGHTS DRIVING return with the radio edit for legendary single ‘Bandana’. Composed of Nathan Reyes (vocals, guitar), Josh Kindla (guitar), Ernie Montaño (bass) and Diego Briones (drums), the quartet met at high school and at a musicians conference in LA,, and the rest is simply history. Back with the exceptional indie-pop offering, ‘Bandana’ was self produced, and made with computer samples, as well as live instrument studio recordings.

Nathan says, “I remember making the song in my bedroom late one night after a party. I believe that it was a Halloween party. I remember it was a crazy fun night. My cousin and I were dressed up for the party, and I remember him wearing an odd bandana that night. It was the first time I had seen one in a while and I remember it leaving an impression on me. Around this time, it was a big transition period of my life. I wrote the lyrics in light of what was going on and how everything was happening so quickly. Sometimes it takes a couple of big events to help chang
e someone and help them realize what really matters.”

Armed with a nostalgic sound of yesteryear, LOVE LIGHTS DRIVING’s songwriting consistently sticks with the times. Refreshingly original and vivid from the get go, ‘Bandana’ is bathed with a chilled soundscape suited to flat you into the clouds. Making music for their own sake and certainly finding their niche along the way, this band stands out from other LA acts simply because they don’t follow your typical rulebook. Built upon friendships, you can certainly hear the chemistry within the group.

Vocalist and guitarist Nathan learned music through growing up playing drums and singing in church. Whilst religion has played a role in Nathan’s intuition as a songwriter and vocalist, Diego had a more isolated experience under the whims of a formal classical music instructor every Sunday. Though the boys come from different backgrounds, they both believe that they balance each other out. Their belief is that their polarity and the way they are able to balance it out is what gives them their strength as people/friends/musicians.
Posted by Liberty PR at 12/15/2021