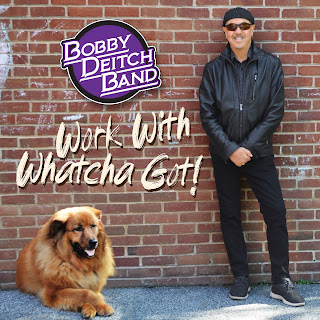 Bobby Deitch grew up being exposed to an eclectic range of music from his family members. All of those influences come flowing out of his music on Work With Whatcha Got! Which was released a few weeks ago. Bobby heads up the 7-piece eclectic band.

The Bobby Deitch Band offers up nine tracks about the human condition. The male and female give and take vocals on several of the tracks make this music get closer to the heart. Music like this can get you very sentimental but it also is most importantly easy to listen.

The combination of soul, pop, and rock with plenty of funkiness like on “If Looks Could Kill,” keep the flow of variety on this recording consistent. The consistency lies in the strong musicianship and variety of styles that are incorporated in every track. This is one of the coolest tracks on the album for sure. It is as danceable and funky as it gets, the Bobby Deitch Band pull out all the stops on this one. They put the boogie into the Woogie…yes sir!

When I first read the write up on the band’s Soundcloud page this segment gave me a hint of all the influences that permeate their sound: Uplifting original Soul music that takes its cues from Stevie Wonder, The Beatles, Earth Wind & Fire, Billy Joel & Michael Jackson.

That is about as mixed as you can get for the types of music that you will hear on Work With Whatcha Got! Early influences for Bobby included big band, doo-wop, and pop, so the natural progression was to incorporate the previously mentioned artist's sounds as well.

“He Loves Me” features the beautiful vocals of Natasha DiMarco with a cameo appearance by Turkuaz vocalist Shira Elias. This takes the band into a nice smooth groove as they venture into a flat-out love song. The lyrics are to the point and delivered perfectly as the music moves with the emotion of the singer. As she brings her voice to a different register and emotion the band just cooks along with her. It is heartfelt and sexy.

“Constant Complainer (feat. George Porter Jr.)” gets back to the funk and horns of previous tracks with an in the groove bass line that leads the way with in sync drumming. Including George Porter Jr. and his bluesy gritty vocals gives the track a definitive soulful in the pocket blues feel as the band just kills it in support of all the great vocals. This is one of the finest tracks on the album.

Work With Whatcha Got! is full of a lot of great energy and easy to understand and relatable lyrical content. This opens the door for a listener to walk right in. It is a musical welcome mat that you will not be able to resist. And the good news is it comes backed up by some fine music with good vocals to catch your ear on every track.