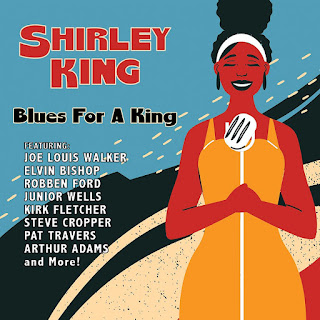 Powerhouse? Check. Musical family lineage? Check. Try as you might, to find a smoother summer sizzler than Blues For A King, you won’t have much luck. Shirley King, the daughter of famous blues legend B.B. King, arranges a collection of 11 feel-good tracks of classic covers and original pieces. Not much is known of Ms. King personally. She was born in 1949 and unfortunately, most of her adult life remains spotty, other than the fact that she was an exotic dancer since 1969. In 1990 she switched over to the blues and has done her father’s legacy well.

Looking at the artwork for this record, it is simple and colorful. Much like the genre it embodies, the album is bold and captivating utilizing color and animation. Blues finds a way to show the same concepts keeping the lyric structure symbol and coloring the singer’s tone beautifully with the emotion of often strife and trouble.

With two albums under her belt, Blues For A King soars into the stratosphere with songs holding mainly a strong, upbeat tone. Select songs such as “Can’t Find My Way Home,” “Gallows Pole,” and “Hoodoo Man Blues” do carry a more serious, darker sound but, not so much so that it completely changes the mood of the entire record for the listener.

“All My Lovin’” and “Feelin’ Alright” starts the album off as  “good morning world, how are you today?” and “sultry meets self-confidence” songs respectively. How can you not turn the volume up when the singer exudes so much love of life. “I Did You Wrong” is far from wrong at all. It acknowledges the pain the singer caused her significant other, feeling nothing but remorse for her part in a failed relationship. She then wants to reach out somehow to attempt to repair the damage in front of her.

We turn the volume back up to 11 when “That’s Alright Mama” comes blaring on. It’s an ode to what comes through every child vs parent situation, regardless of age, in terms of big decision making. One party might be uncomfortable with a decision like moving on or out, while the other party objects to any notion of the idea. “Can’t Find My Way Home” is calling upon those who live with their heads in the clouds or who might feel superior to other people or a group of persons. In this case, the singer is struggling to focus on the journey back to her home to spend more time searching for something greater than her home, not acknowledging a sense of superiority; rather comfort in simply being a wanderer for the time being.

“Johnny Porter” resembles a lot of a similar story-teller song “The Night the Lights Went Out In Georgia.” It speaks of a child who is making careless, destructive decisions on the streets. Meanwhile, his mother is worried sick about his well-being. The song is a coming-of-age combined with testing waters theme like no other.

This “Feeling Good” rendition is smokey, intense, and powerful where it often is light, bright and airy. Though, it still manages to keep a positive tone with the obvious lyrics and guitar accompaniment. “Give It All Up” is the honeymoon phase of life. Ready to throw caution to the wind and feel some constant goodness in her life, Shirley King is laying it all down for the one she loves. Then, we arrive at “Gallows Pole.” Another darker song on the record shows how human life can turn into a value for some people, with not a care in the world to rethink their action.

“Hoodoo Man Blues” is a struggle to find out why everything seems to be going topsy turvy in the singer’s world at the moment. She calls out for the Lord but, it seems the message isn’t getting through. Rounding out Blues For A King, a wonderful cover of “At Last,” makes the album shine and feels as though there is peace among the blues.