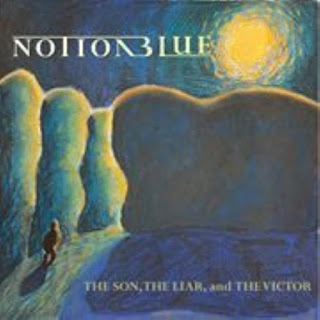 This was an unexpected album for review, The Son, The Liar and The Victor, as I had not heard of the band, Notion Blue before. A little bit of research gave me some info about the 3-piece rock band from Connecticut.

Unfortunately, the unifying force behind the formation of Notion Blue was a tragedy. Brothers, Gabe (drums/vocals), and Luke (vocals/guitar/bass) Chase had often joined Max (vocals/synthesizer/keyboards) and Johny (bass) Barbi for gigs since high school days. Although this happened a lot of the time, they never actually considered forming a band. Everything changed in 2018 when Johny died unexpectedly and in dealing with this loss, the three remaining friends decided to form an official band to produce a concept album about the life and times of Johny Barbi. Over the following 12 months, they worked hard, writing and recording demos and wrestling with rough ideas.

The resulting album, The Son, The Liar and The Victor, is a prog concept album greatly influenced by concept albums from The Neal Morse Band, Dream Theater and Steven Wilson to depict Johny Barbi’s life.

The album is a 10-track release with a total running time of just over 42 minutes. The longest track on offer is track 5, “Keeping Apart” which clocks in at 5:41 minutes, and the shortest is the opening track, “Memories” at under 2 minutes.

Opening the album is “Memories” (1:31) a short introduction to the album with excellent piano, strings joining in around 35 seconds, and a plaintive vocal appearing after 60 seconds. A really good piece of music to set the listener up for the rest of the album.

The fourth track, “The Liar” (5:40) has a stunning keyboard/guitar intro before dropping away to the vocals and then returning to the opening passage. The tempo builds up to another stunning keyboard/guitar interplay which drives the track on until dropping away with the return of the vocals and the opening theme. An interesting guitar riff takes the track towards the finale and a gentle fading away.

The last featured track is track 6, “Doubt Is Not A Destination” (5:36) which commences with a gentle acoustic guitar and vocal, taking the track onwards for the first 1:30 minutes, before the band starts to flow with an excellent section and a great guitar backed passage. By 3 minutes the music has returned to the gentleness of the opening section before building up as the track enters the final quarter with some excellent harmonized vocals and strings again reappearing. The gentle acoustic guitar from the start escorts the track out.

This was a huge undertaking by the three remaining friends and musicians, and they have produced an excellent prog-rock album. If I have one niggle, I do tend to find that in trying to convey areas and happenings in the life of Johny, the flow of the lyrics sometimes doesn’t quite work, but with such excellent music, it is only a niggle. The band provides sensitive lyrics, great vocals, both on lead and on the harmonies, superb bass, guitar, and keyboards going from the delicate to the soaring and the gentle to the driving.

I found The Son, The Liar and The Victor to be an excellent first album and congratulate the three band members on their achievement. Grab a listen to this album, and while I cannot guarantee that everyone will be blown away by it, I feel that many prog followers will find this of sufficient interest to add it to their collection.