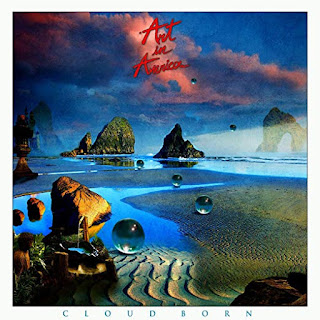 Like a book, music can catapult you into an imaginative adventure. Art in America most definitely built their latest LP, Cloudborn around the concept of an alternate universe where all your troubles just disappear and the listener cannot wait for what may lie ahead.

The theme of experimental simplicity is fitting for this band as the band members started, as they state on their site, “in their living room kicking around some musical ideas with guitar, bass and some unusual instrumentation - … and a Japanese Koto.” Band members and siblings, Chris Flynn – lead vocals and guitar, Shisonee Flynn – harp, koto, tamboura, and vocals; and Dan Flynn – on drums and percussion, began the venture of artistry and bringing together the framework of a band. Soon, after adding Jim Kuha – on bass guitar and backing vocals, and Garry Galloway on the keys; the band was finalized and two albums later, Art in America is on the rise to become a part of every Progressive Rock N’ Roll lover’s collection and earworm.

“A Tale of the Unexpected” sounds like that of a videogame cut scene. It offers the listener a way to both, relax and get introduced to a realm of unusual instruments that typically is not included within Progressive Rock album concepts. The harp, an Indian piece called a tambura, and a Japanese koto are fused throughout the track list.

Much of the rest of the album gives off a blend of 80’s and 90’s Progressive Rock/Pop vibe. As soon as I heard the first few lines of “I Am I,” I felt like I was inside a Classic Progressive Rock or Action movie soundtrack music video. “Someday” hits right in the heart of any listener with half a sense of aspiration and hope. It proclaims that one day soon he (the singer), will get to where he needs to be.

Just take a look at this particular album art. It is of a vast and new unexplored world that leaves an imprint of a powerful image on the listener’s mind. “Drool,” on the other hand, gives the feel of a traveler that is in search of something but; no one quite knows what. The singer may just be wandering down an endless road. Rounding out the first half of the track list, “The New Swami” is one of those songs that you just cannot exactly place your finger on how to react. It contains elements of the tambura giving the tune some peacefulness. It is sung so brightly but, if you listen to some of the lyrics: “The new Swami smiles, as rubies turn to rubble;” the Swami is not as peaceful as proclaimed.

“Someone Called My Name,” is all about looking for answers. It’s a journey where all but, the voice he keeps hearing over and over again remains a constant in his life. We never do learn if he discovers who or what he has been searching for. Art in America goes back to a wild-western-type of a theme on “For Shelly.” It sings of coming to a realization of whom he had however, now she’s gone out of his life Trying to find any remnants of back to when he and his friend or lover back to simpler times, the singer is in a daydream-like state and the rhythm remains constant to maintain that feel of flashbacks. It’s a very mellow peace to bridge the album together, it almost becomes instrumental.

Going from an almost monotone beginning to an action-packed four minutes and twenty-one seconds, “Facelift” is a fun changeup from the rest of the record. It feels like the singer or the listener could be charging up to something blending with a somewhat mystical sound towards the end. It becomes one of the standout tracks on the album for the simple reason that it brings some life and rejuvenation back into the record; like a reawakening of sorts.

The last three tracks create their own personalities. “Don’t Look Down” keeps with the upbeat sequence of the prior track. It’s guitar solo, is on the shorter side but, still offers what every Progressive Rock lover desires, a pure shred of the strings through your speakers. “No Wonder” finds its way on this record perfectly as its unique sound, almost like a movie scene, or story time sequence. The lyrics do not reflect much in terms of positivity because the man in question has made some mistake that he cannot seem to identify but, she knows quite well what he did. It’s the typical couples’ flare-up of arguments, disagreements, and sometimes breakup. Finally, taking a look at the last track “Goodbye My Love / Mind’s Eye / Peace of Mind,” it is truly an ideal finale to a perfect Progressive Rock album. It begins slow and swing-like, then, by the time it gets to “Mind’s Eye,” it blossoms into an up-tempo grand finish to make the listener feel as though they are leaving the concert of their life.

Cloudborn is that album that defines experimental. It pushes all types of Progressive Rock boundaries and draws the ear of various listeners. If you are looking for a record that makes you daydream, that makes you feel good overall, and that can turn any day around; this is the album for you. Often, Progressive Rock is misconstrued as angry – when commonly dealing with Metal, or disturbed when playing a bunch of Alternative artists; there’s a third avenue of eclectic and experimental sound that can accompany a typically positive intonation.

Key tracks include: “A Tale of the Unexpected,” “The New Swami,” and “No Wonder.”