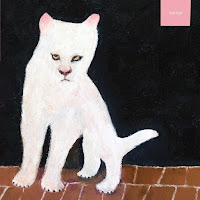 After Duster’s droned out experimental lamentations helped bury the 20th century, the band took an extended break, which lasted a decade and a half. Founding member Clay Parton explains, “We didn’t feel like we belonged in this world before,” he said. “And the world is only an even bleaker hellscape now.” Duster’s latest release, Duster delivers a pounding, pulsating battle march through this bleak hellscape. It is a sound that Parton aptly describes as “purring distress”.

There is an element of pain that these tracks bring forth, yet it is a bearable and oftentimes pleasing torment, like a mild sunburn or ankle sprain. Duster skillfully walks the thin line of pleasure and pain, stepping from one side to another, yet maintaining their balance throughout.

The opening track, “Copernicus’ feels like an interrogation lamp turning off and on and off and on again, blasting into your brain in forcefull, mind-numbing 2-second intervals. “I’m Lost” deliberately cuts the vocals lower than the thundering fuzz of the guitar, drum, and bass blend. Straining to make out the lyrics is part of the experience. “Don’t you know I’m lost? Don’t you know I’m lost without you here.”

Other angst-ridden gems include “Summer War,” “Damaged,” and “Ghoul.” “Go Back” evokes the most haunting and terror-ridden vibe on the album. Even the more seemingly optimistic “Lomo,” with its rich sonic texture and evocative atmosphere lyrically pull the listener under its spell. “Late into the night. When it’s still and calm. And the mind slows down. Is this death? Maybe. It’s alright.”

All said, If you’re looking to have your soul musically eviscerated, give Duster a listen. The depths you’ll reach are impossible to arrive at with other bands. The mastery of this record lies in how skillfully Duster takes the listener to the depths of their own soul, returning them emptied and expunged, ready to start anew.