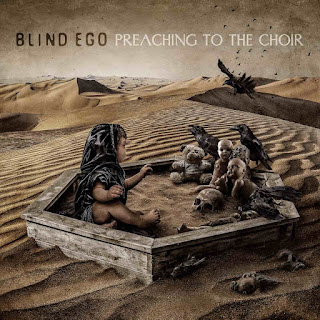 This record is a blast of power and energy. From start to finish, Blind Ego’s efforts into their fourth studio album Preaching To The Choir is a force to be reckoned with. The uplifting lyrics blend seamlessly with the sounds of the guitars and drum in each track like a different chapter of a storybook. Most of the album reflects a very upbeat and positive tone which, to me, is hard to expect from a Rock, or Metal album typically. “Burning Alive,” the lead single, sounds not only the most radio-friendly but; somewhat like a Pop record because of how light it plays.

“Massive” is the ultimate starters song. You would expect to hear this song at the lead out of the announcement of the two Super Bowl LIV teams. It has so much fight and exhilaration throughout it. Not only that but, it sends the listener to a place where they feel like they are marching to their victory, to claim what is rightfully theirs.

As though one is stepping into a video game, the title track, “Preaching to the Choir” starts like walking onto a warp pad. The song quickly becomes a thrill, a rush of blood to the head, because you’ve been headbanging along with the guitar and drum patterns throughout. Then comes about, “ Burning Alive.” Leaving the past behind and watching it go up in flames, the band prepares and sets off to make a new out of the fire and ash of what they intend to leave behind; even if they catch a little singe on their way out.

“Line In The Sand” turns the album a little darker. The band is engulfed in a struggle of some kind. They don’t see a way out per se but, they establish then and there, that the things that turned them to the darkness of sorts, will not keep them from moving forward. The music keeps propelling the band, the album, and their career forward.

“Dark Paradise” keeps with the same darker underlying spirit. It acknowledges that standing alone might be the best way to move forward. The realization that sometimes you have to walk out the toughest battles alone, lays a theme for indeed, a dark paradise – a vast land now covered in blank darkness, that seemingly fits eternity. If there’s one theme that runs through this album, it’s consistency. “In Exhile” reflects that the singer has been running constantly and now has gotten to the point where those around him cannot see him, do not hear him, and do not care to look. He has grown comfortable this way, just muscling through whatever he must to get through day today.

“Heading For the Stars” become a bit lighter, in having a companion beside one another as they venture onto brighter things ahead. However, they find themselves embattled in a sea of negativity and disaster to get through. On the bright side, the singer notes, “the future is alive.” So, there must be something worth the chase after all. “Broken Land” lends itself to the same ideals of “jump into the flame” to get to where you want to be. It speaks of change, and what is to come of it on the other side. But, this broken land is wasted on them anymore because there has been so much trauma in its path.

The final track “The Pulse,” is all about anticipation. The singer reclaims what he’s been searching for in terms of peace and a purpose (or pulse). Beginning the track is just over two minutes of a lead-in of thrill and sound. But, what will come of this man’s future in taking down the one-man-army that stands in his way? In many ways, that one man is simply trying to find a way back to a sense of normalcy and to build upon that.