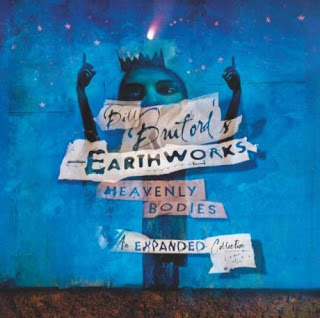 Not to offend anyone, but I am not the biggest fan of jazz music. I usually only put it on for background noise. I don’t like how there aren’t any lyrics, and I think it’s a chore to have to sit through jazz music. With that being said, I know how complicated it is to arrange and play a jazz piece. Based on the artwork alone, I would have no interest in this album. With an album title of Heavenly Bodies, combined with what looks to be a bad collage of different pictures as the art, this album seems like some kind of religious experience. Jazz gets a bad reputation for being the “boring old man” music. Unless I am listening to this genre of music live, I would have to agree with the statement. I like jazz that isn’t your typical jazz classic, so this album should be a good discovery for the person who is new to jazz, or never really liked it to begin with.

Now Bill Bruford and his band called “Earthworks” set out to create a style of jazz that pushes the boundaries of the genre. These incredibly talented musicians showcase their playing skills with complicated techniques and difficult-to-play progressions. The names of the songs are oddly specific, but I guess you get to have fun with them when they’re the only words on the track.

“Stromboli Kicks” is the first track on disc one. It sounds like something that could be released today, in 2019. The synth is very prominent in the intro and throughout. The rhythms and notes being played are complex, and I think you would appreciate everything happening if you know anything about music theory. Otherwise, it’s just a cool jazzy song that will make you feel like you’re traveling through space. The ending is an unexpected percussive section that then builds into a big production with multi-cultural elements.

“Up North” is a milder song from disc one. It has the classic jazz sound to it, with some extra added flair from the percussive instrument that sounds like a fork tapping on a glass jar. Halfway through the song, there seems to be a pick-up in rhythm/tempo, which changes the vibe of the song into something you could dance to. “Pigalle” is named after the French neighborhood. It’s the equivalent of naming a jazz song “New Orleans.”  I would say that this is a fitting title. The accordion is what gives it that French feel. I’m not sure if any production editing was done post-recording, but the intro is very intriguing in this song. Somewhere in the middle of listening to “Nerve,” I found the perfect description for the song. It sounds like something off of an older cartoon. For example, the episodes of Tom and Jerry, where the cartoon takes place in space, is the perfect example of what I feel from this song. The clipping and chirping sounds bring out that strong outer space element. Okay, now that I mentioned this cartoon, I can’t get the idea out of my head when listening to the album.

Moving to disc two, “Dewey Eyed Then Dancing” is a good holiday song. It is romantic and uplifting at the same time. It’s a song that any hopeless romantic would dream of dancing to under a lit-up pavilion at night. I could see this song being a soundtrack in a lot of Valentine's movies. I was curious to know what surprise sounded like, and I think that “The Sound Of Surprise” didn’t do it for me. There weren’t as many fun elements as I would have hoped for. Even listening through to the very end, I still was underwhelmed by the song. "Youth" takes me back to the '20s swing era. I feel like dancing during this track, and I could see it being a good track for a '20s themed New Year's Eve party. "Thud" is cluttered with a bunch of moving melody parts. It takes me to the hustle and bustle of New York City. This song is fresh, and the sax solo is not for the faint of heart. Compared to disc one, I would say that disc two was less interesting.

Now, this is an album that you can’t just search for on Spotify. The box set is 24 discs total and will cost $94 on Amazon. It breaks down the cost to less than $4 per disc. That’s an unbeatable deal for the band’s 20 years of work. I think this album is impressive because it puts a new spin on a somewhat boring genre. The holiday season will be here in a week, so take that gift money and get your hands on this album. Any musician would like this album set, and maybe it is just something that you put on in the background, but you’ll have hours of productivity-music with the set. As I said, I wouldn’t have listened to this album, if I wasn’t reviewing it, but I’m glad that I got the opportunity to hear all the greatness contained on it.