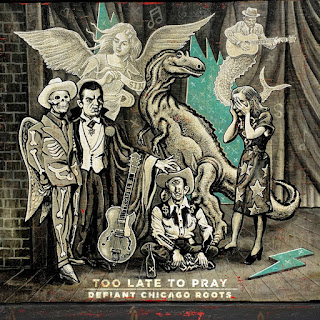 This album feels communal as if the album was a small town of diverse and interesting people, each with a story to tell. As you listen to each song, you feel like you’re getting to know every artist and their message. While “The Last Honky Tonk in Chicago” is upbeat and fun, “If It's News To You” immediately adopts a grunge tone. Too Late to Pray Defiant ranges from good news to bad news, from orchestral music to rock, from a solemn tone to an upbeat tone.

A key component of Too Late to Pray Defiant is its celebration of diversity. Although it isn’t explicitly mentioned, the wide variety of songs in this album accurately resembles the wide variety of people in the world. From country to country, community to community, diversity is everywhere in our society and the lack of conformity is so often shamed. Through the increase in restrictive immigration laws and the harsh realities of racism, instead of promoting diversity we condemn it. Too Late to Pray Defiant does the exact opposite of that. Each genre of music it includes is indicative of a separate community in today’s world. Although we’d expect such a strong range of genres to clash, each song compliments each other. The melody in “Wearing White” consists of cello and piano, and yet it still manages to transition into the undertones of rock in “Lay Me Down.”

Each of the contributing artist’s musical talent is evident in every single song. Whether it be “Wearing White”’s gorgeous melody or “I Am a Big Town”' emphasis on the incredible guitar ability, each artist knows their way around an instrument and isn’t afraid to flaunt it. The song feels like a rollercoaster, going up and down from emotion to emotion telling us a story about the community of musicians. Too Late to Pray Defiant is immersive, utilizing the celebration of diversity as well as the incredible musical ability to its advantage.

Key Tracks Include: “Wearing White” “The Last Honky Tonk in Chicago”, “I am a Big Town” “A Little Bit of Buck”