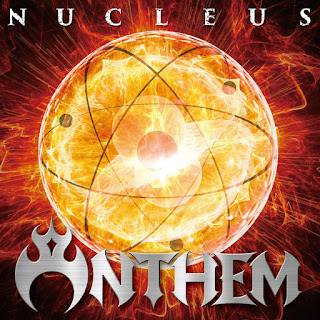 Over the course of more than an hour, Japanese heavy metal band, Anthem, relentlessly delivers hit after blistering hit on their latest compilation album, Nucleus. This Greatest Hits Collection features re-recorded English language versions of songs that have gripped metal fans since the Tokyo-based band first achieved success in 1985. Even though this album’s content is pulled from source material more than three decades old, sonically, the songs blend seamlessly together.

Each track on this project is comprised of elaborately produced acoustic layering which serves to distinguish Anthem’s sound. The band has frequently remodeled their line-up over the years, but with a seemingly endless Rolodex of talented musicians to call on, Anthem continues to zealously create eclectic and ecstatic heavy metal. On Nucleus, Yukio Morikawa provides the lead vocals, Akio Shimizu plays guitar, Naoto Shibata is on bass, and Isamu Tamaru wows on drums.

If the group’s years of personal hardship and hiatus have done anything to their music, it seems to have only invigorated them. The first track, “Immortal Bind,” is a vigorous, testosterone-pumping, cyclone of energy. It’s almost five minutes of sustained spirit, complemented perfectly by thrilling guitar solos and screaming vocals. “Black Empire,” a power-metal track and the lead single for this release, similarly highlights lead-vocalist Morikawa’s impressively breathless delivery.

On the electrifying track “Stranger,” Tamaru stuns the listener with a dizzyingly fast drum performance, which pairs with terrific soloing from Shimizu and another powerful vocal delivery to achieve an album highlight.

Another high point is “Ghost in the Flame,” which wraps up at just under eight minutes. Placed right in the middle of this compilation, it’s a refreshing switch-up from the band’s tried and tested formula. It’s a slower song than what Anthem has delivered up to this point, the drums take a backseat to gorgeous guitar licks and deep lyrics are delivered without the routine manic intensity. As the song goes on, the guitar shines through in an ascending, glorious crescendo.

“Awake” is a similarly well-balanced track, which seesaws proportionately between vehement main guitar, layered backing guitar, and emphatic drums. This establishes a splendid base upon which Morikawa delivers euphoric vocals. The final song, “Unbroken Sign,” also leans away from the band’s power-metal sound which results in a harmonious, strong, and even finish.

Ultimately, Anthem delivers a tireless, emphatic performance throughout this album. However, as each song rolls into the next, the band’s one-dimensional formula threatens tedium. “Ghost in the Flame,” “Awake,” and “Unbroken Sign” are all tracks that sufficiently address this over-cohesiveness and break the mold. Never lacking energy, but perhaps at times innovation, Anthem’s Nucleus is a wickedly exciting, intense, and powerful foray into this metal band’s long, distinguished career.