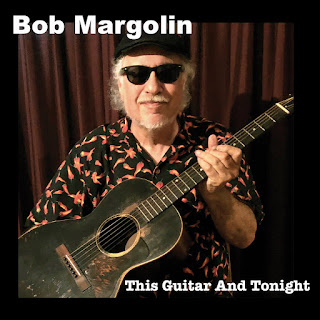 Making music for nearly 50 years now, Bob Margolin is the current face of Blues. Born in 1964, Margolin began playing guitar at the age of 15 and quickly started getting gigs at local restaurants. Not long after that, he was recruited by Muddy Waters in 1973 and went on to receive 3 Grammys by his side. In the ’80s, however, Margolin left Muddy to go solo and started diving deep into the world of Blues. As the years went on, he began to receive more and more recognition, leading him to win “Best Male Blues Artist” and “Best Traditional Blues Album” in 2016. After his most recent album “My Road” was a success, there’s been much excitement about the release of his upcoming album This Guitar and Tonight. Not only does this album meet the high expectations set by thousands of his listeners, it exceeds them through each song’s
heart wrenching and personal sentiment.

This Guitar and Tonight is wonderfully emotional, it's a brief look into Margolin’s emotive side. Throughout the title track, Margolin wails into the mic about his former sorrows regarding a woman. He describes how his guitar and Blues are the only constants in his life, stating “The only thing that’s right is this guitar and tonight” while discussing an issue with a love interest that is troubling him. Margolin proceeds to sing about the same sorrows in several other songs to highlight the dismal events in life so many people can relate to it. The singing style that Margolin takes on is indicative of the Blues genre and causes the readers to empathize with him and relate to his troubles. Margolin’s ability to tap into the emotions of the listeners is a wonderful example of the extent of his talents, he describes woe and despair in a way that is personal and intimate.

One of the most intriguing parts of this album is its political take. In the song “Evil Walks in Our World,” Margolin highlights the maliciousness currently seen in today’s political atmosphere, singing “Open racism, antisemitism, families separated, kids in cages, evil walks in our world.” Whereas multiple other tracks discuss issues with love affairs, this song gets more serious and talks about the holes in our society: the injustice and inequity so apparent in the United States today. Margolin gives his take on the current political atmosphere in a heart-wrenching manner that perfectly depicts the despair and hurt felt all across the United States, he uses his fame to bring attention to topics that directly affect and hurt a huge population in the United States and calls them out for what they are with no shame, evil. Margolin also expresses his political opinions during the song “Dancer’s Boogie.” The cheery and upbeat song takes a detour from the rest of the album to tell the audience to get up and dance with the song. This is Margolin’s call for unity: by telling everyone to come together and dance, he’s telling his listeners to ignore race, sex, political parties, etc. and find peace with one another.

The rest of the album tells the story of a woeful character expressing his tragedies in a multitude of ballads, a character that Margolin is perfect for. The combination of Margolin’s sorrowful voice and the use of traditional Blues instruments cause the entire album to feel emotional and intimate. Each song feels like you’re consoling your friend while he goes through a rough album. This Guitar and Tonight is a perfect album for when you’re in the mood to let your emotions out, get mad at the world, or a little bit of both.

Key Tracks Include “This Guitar and Tonight,” “Evil Walks in Our World,”  “Dancer’s Boogie,” “Blues Lover”