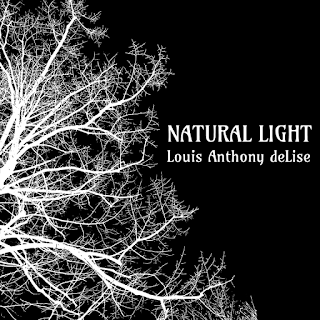 My very first journey into the music of Louis Anthony deLise proved to be quite special. Natural Light is a stunning recording. Right from the outset, I was mesmerized by this music.

Excerpt From Artist Website: Louis Anthony deLise is an award-winning composer, record producer, arranger, and conductor. His compositions for soloists and ensembles have been recorded and are often performed worldwide. His arranging and conducting work appear on albums alongside that of many of the world’s top pop artists including, Carlos Santana, Sheila E., Wynonna Judd, Kanye West, CeCe Winans, and Paul Shaffer.

That is enough to pique any music lovers’ interest I would think? With one look at the artwork on the cover of this CD, and I could tell the right message was being relayed to a perspective audience and more importantly to me, the next listener.

All of the instrumentation is incredibly good. Louis plays the acoustic piano, amongst other things, quite brilliantly. And it does not hurt to have on hand Jeff Oster (trumpet), Nancy Rumbel (oboe and English horn), Christine Hansen (flute and alto flute) and Marjam Ingolffson (cello) added to mix to complete each individual track with taste and preciseness.

“Spring Rain” was the first track that gave me the warm and fuzzy feelings of satisfaction. The rain in spring by definition brings the hope of a new day, sunshine and the coming of summer, flowers blooming and all the trees turning green. With added sounds of nature on the track, I felt like I was inside the song, living the moment within the time and space that mother nature does her work. It’s a beautiful thing to understand and accept how we are intrinsically linked to the earth and all living things.

“Autumn Twilight” brings another season as the leaves turn, the air gets crisper and the colors are vibrant along roadsides and in the mountains of the Northeast. I live it every year and absolutely love it. Ask any New Englander what is their favorite season and I bet they say the fall. Then, of course, the imminent old man winter comes in to freeze the earth and put our grand Mother into hibernation on “Winter’s Chill.” The progression of the tracks is perfect, in sync with the balance of nature and most certainly with this listener.

After all, this is the reason I was so taken right away listening to this album, its musical perfection as far as I am concerned. There probably is not a musician in the world that would say their music is perfect but from where I sit, all I needed to hear was the 11 tracks of new age instrumentals. The occasional elements of jazz painted in and around the canvas of this musical vision made it all even tastier. It is a picture I would want to look at more than once and so will you once you hear it!