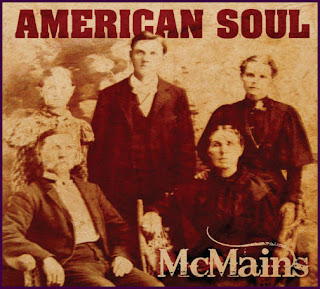 McMains is Mick McMains and his new recording is titled American Soul. Some folks may recognize his name as the producer of 2 excellent CDs for the art ensemble known as DJ Monkey. I was actually introduced to this music by Joey Alkes the founder of DJ Monkey.
So Mr.McMains is one of the blue-blooded Americans that has descendants that go back to the days when the Hatfield’s and McCoy’s were feuding. One look at the CD and it gives you an idea how far his heritage goes back. American Soul indeed.

The music encompassing the 13 tracks on the CD covers some country, blues, and pop with a definite bite. I would say it leans more towards country than anything. McMains has that “matter of fact” attitude in his vocalizations. I did find it refreshing, and a bit gritty and down to earth, which I like.
This is the kind of album that will grow on you. The first few tracks passed and I was not sure if I was going to get into it. Eventually, that happened with a close attention to the musicianship and lyrical content (which comes inside the CD booklet, an added bonus).

I especially enjoyed the spiced-up version of “Take Me Home, Country Roads.” This is one of the songs by John Denver that ruled the airwaves in the 70s. So sweet memories came my way while listening to that tune. I thought it was done very well and McMains made it his own. That is not the easiest thing to pull off either, so kudos for that.

If you are in for a countryfied bit of a listen, I think giving American Soul a spin may be just what the music doctor ordered.