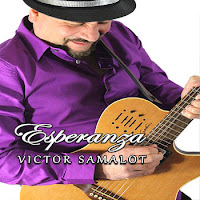 Music that has flavor, color and personality are what gets my heart pumping. Victor Samalot is a name that was hard for me to forget. I covered some music by his band Rare Blend back in 2006. I am so glad he stayed in touch and invited me to cover his new album Esperanza.

Esperanza is a Spanish word for “hope.”  So, if you have an ounce of hope in your soul that some good music will change your mood…then it is mission accomplished with this album.

Victor is an accomplished guitarist and he reaches new heights on Esperanza. My love for Latin flavored music goes back many years when I listened to Segovia, DiMeola and many others that took that style and brewed it into a world fusion that blew my mind. This is not that kind of music however I do appreciate an individual artist sitting down and playing their instrument with minimum to no accompaniment.

With nine tracks offered up on Esperanza, one great tune after another just poured out of the speakers. It was like Victor picked up his guitar and never put it down. The flow and pace that he sets right from the start is like a river that knows exactly where it is going.

I do not think it would be fair to mention any particular track that stands out on an album that is so outstanding from beginning to end. That is no exaggeration either. The nine tracks went by in the blink of an eyelash for me. Anytime I really enjoy the music as much as I did this, time is relative to that enjoyment button getting pushed in all the way in and not popping back out. That is a major accomplishment for any artist trying to get your attention and then keeping it. My ears are designed to evaluate thus making the experience quite a bit different than just a casual listen.

With all of that in mind, I first think about how the music makes me feel then from that point listen to the story that may be unfolding and finally the production values. Victor gets an A+ an all accounts. The story part however is going to have to be your own, it is very alive and cinematic music so that will not be a problem.

Esperanza is a work of art and I hope that Mr. Samalot decides to keep going in this direction because he certainly has the mojo to play any type of Latin flavored music and make a direct impact on a listener.