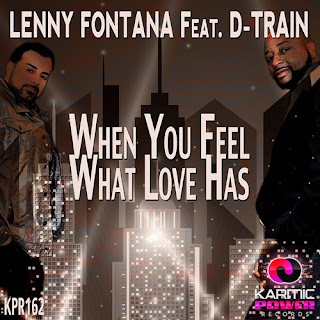 Two music legends, Lenny Fontana and D-Train, have joined forces to create a classic New York dance-floor hit with crisp beats and infectious melodies wrapped around a vocal that could only ever be recognised as the power-tones of James himself.

Check it out here:


Brooklyn singer James ‘D-Train’ Williams is famous for eighties electrofunk hits such as ‘You’re the One for Me’ and ‘Keep On’ and has toured with an extensive list of renowned musicians including Shania Twain, Steve Winwood, Sheila E, Snoop Dogg, Warren G, Jay Z, Beyonce, Bruce Springsteen, Garth Brooks, Bruno Mars, Jennifer Hudson, Patti Austin and Earth Wind And Fire.
Meanwhile, International Dj and Dance Music Producer Lenny Fontana is known primarily for forging the hit 1999 single ‘What You Need’ with Duane Harden as part of the duo Powerhouse and "Chocolate Sensation". Fontana has worked alongside artists from Norma Jean from Chic, Crystal Waters and Byron Stingly from Ten City and runs his own record label Karmic Power Records.
D-Train now lives in Brooklyn and regularly practices martial arts, yoga and meditation; whilst Lenny Fontana is busy running his own label (under which this track is produced), as well as being an avid collector of toy trains. Both have scored number one hits and appeared on Top of the Pops.
‘When You Feel What Love Has’ has already achieved over 111k plays on Soundcloud and is set to be a dancefloor hit this summer. Five mixes and a music video are in production.
The single is out now having dropped April 3rd.