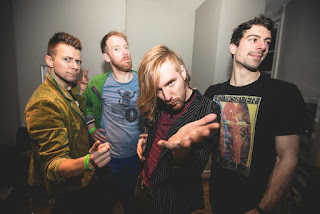 'What a glorious noise.' The Tom Robinson Show, BBC 6 Music
Japanese Fighting Fish, four lads who anchor their boat in London, are bringing fun back to rock with their electrifying new album ‘Swimming with Piranhas’, plunging us knee-deep into ferocious riffs then pulling us out again with soaring vocals from frontman Karlost.
‘Swimming with Piranhas’ doesn’t sound like a great plan for the average diver but Japanese Fighting Fish jump right in and live to tell the tale. This album nibbles away at any possible preconceptions of the band until an epic creature with an unnerving undercurrent is left. The album title comes from the real life wild experiences of Karlost and drummer Sweetman in Ecuador whilst staying with a Quechan tribe when they took a dip in the Amazon River. After their excursion, the boys did a Lep Zep III move and retreated to the countryside to channel all they had learnt from the ‘tribal way of life’ into creating an exhilarating thrill-ride record that bites hard and won’t let you go.
Their latest single from it, ‘For Queen Marilyn’, was written spontaneously after arriving at the recording studio and being asked to ‘just play something’ to check sound levels. An ominous Muse-like riff was quickly followed by crashing drums before the whole thing took off into a grunge explosion. Unwittingly, the Queen was born! After several stages of development, the new track is now available on SoundCloud here -


‘Swimming with Piranhas’ is the band’s third album but the first with Matt McGuinness completing the troop. The album explores new depths with pounding bass lines, incredible drums, and Gareth Mochizuki Ellmer’s pedal board creating the ‘biggest space sounds at just the right time’, according to Karlost, whose own vocal performance is gritty and wild yet captivating throughout.
What do Royal Blood, Savages, and Cage the Elephant all have in common? They were all supported by BBC Introducing! And now Japanese Fighting Fish have joined that stairway there is no doubt they are destined for the heights. One of their next steps will be headlining the venue Milo at the Live at Leeds Festival 2016 and with their sets being renowned for explosive antics and the boys having a habit for ending up accidentally bleeding on stage, this will definitely be a spectacle not be missed.
'For Queen Marilyn' will be available on the 3rd June, followed by the album ‘Swimming with Piranhas’ due for release on the 17th June 2016.
Live Dates:
LONDON The Crowndale (formerly The Purple Turtle) 28.5.2016
BRIGHTON Sticky Mike’s Frog Bar 28.9.2016
Links:
http://www.japanesefightingfish.co.uk/
https://www.facebook.com/Japanesefightingfishuk
https://twitter.com/jffuk
https://soundcloud.com/japanese-fighting-fish